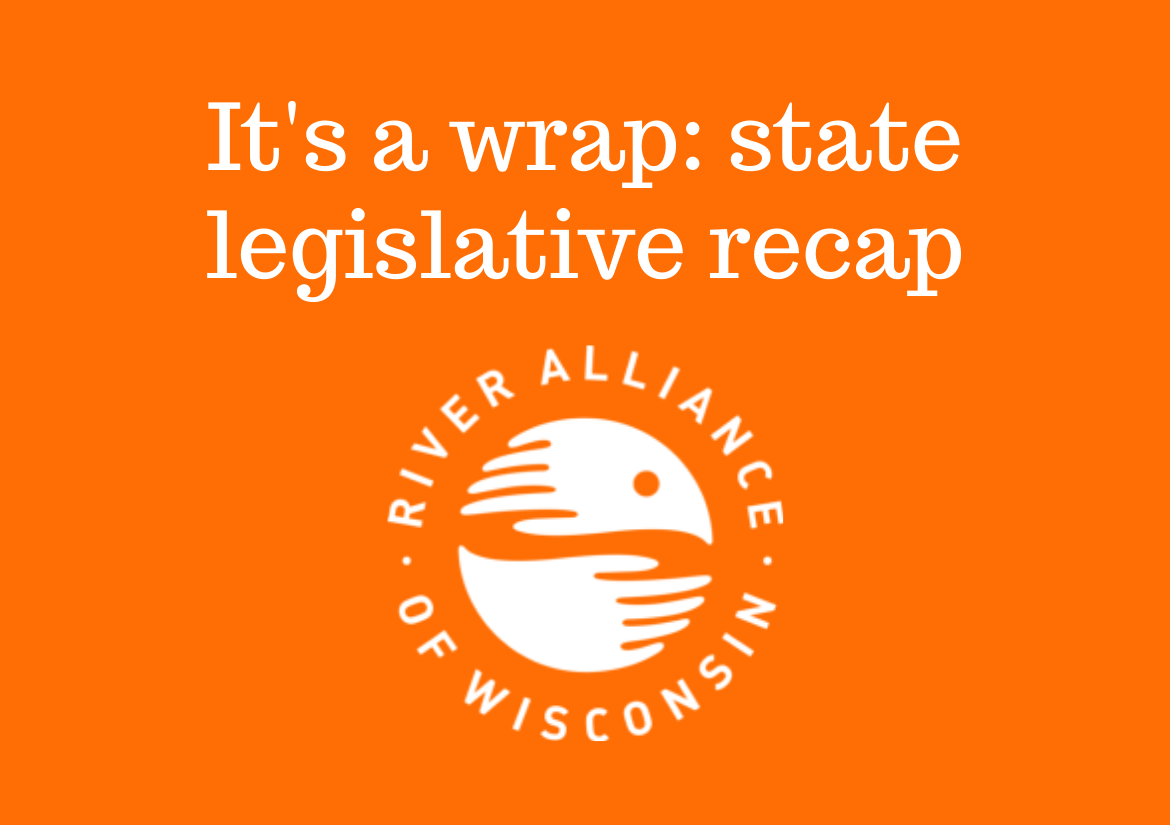 The Wisconsin State Senate ended its last floor session on March 8 and will likely not reconvene until January. Here is a look at what happened – and didn’t happen – with the major legislative and administrative issues River Alliance worked on. We’ve included information beyond what laws the legislature proposed. Changes to administrative rules that apply to the Department of Natural Resources are also inextricably tied to the legislature.

Before we dig in, please keep in mind that many of your fellow Wisconsinites urgently need help with their drinking water. About twenty percent of people in Wisconsin get their drinking water from private wells. Around ten percent of them, approximately 100,000 people, have unsafe nitrate levels in their water, mostly coming from agricultural pollution.

Even families and businesses who use public water systems are not spared. As more and more municipalities test their water for PFAS contamination, the list of places with unsafe levels of toxins in their water grows. Most recently all six of Wausau’s wells tested at unsafe levels of PFAS, forcing the city to share emergency supplies of bottled water with residents. The popular trout stream, Black Earth Creek, joined PFAS hot spots including Eau Claire, La Crosse, Madison, Marinette, Peshtigo, Rhinelander, the Town of Rib Mountain, and more places around Wisconsin.

Whether you live in a big city or a rural township, Wisconsin’s water belongs to all of us and no one has the right to pollute it. In light of these urgent needs to protect our safety to freely drink from our taps and fish in our rivers, what has the state legislature done in the last two years? Virtually nothing.

On the plus side

Assembly Bill 727 on commercial nitrogen optimization passed and is likely to be signed by the Governor. This bill provides a small amount of funding for pilot projects for efficient nitrogen-based fertilizer use, cover crop insurance premium rebates, and creates an unfunded hydrogeologist position in the Geological and Natural History Survey to focus on developing groundwater resource information. This is a positive step, but it is a minuscule one compared to the need in the state to reduce nutrient pollution to our waters.

On the negative side

The CLEAR Act, Senate Bill 361 which would have provided resources and action aimed at PFAS did not even receive a public hearing in either the Assembly or the Senate.

The legislature failed to amend Assembly Bill 728 for the well compensation grant program to make more funding available to thousands of additional Wisconsinites with nitrate-contaminated wells. This proposal was one of the thirteen bills that was recommended by the Speaker’s Water Quality Task Force last session making it the second time the legislature has failed to address this issue.

While they would not act to protect public health, the legislature did take the time to pass Senate Bill 900 that gives away public lakebed lands. We are hopeful that the Governor will veto this bill.

Things to watch out for next session

There were two bills that perhaps give us a chilling preview of what to expect if the legislature did not face a gubernatorial veto.

Senate Bill 894 would further change our administrative law to add more delay and essentially give polluters veto power over proposed administrative rules which would make it even more difficult for agencies to act to protect our health.

Assembly Bill 852 would allow municipalities to sell off land that was purchased using dollars from the popular Knowles-Nelson Stewardship Fund, potentially threatening thousands of acres of public land. Conservation groups showered legislators with their comments of opposition to this bill.

For the last ten years, the state legislature has continually passed laws and taken actions that center power in the legislature, as if it is the only branch of government. Changes made by former Governor Scott Walker have given the legislature far greater influence over administrative rules. Where the DNR is charged with protecting public health, the legislature has systematically prevented the state agency from performing its duty.

Hanging over all of these rules is the fact that the state Senate refuses to act on Governor Evers’ appointees for the Natural Resources Board DNR Board. This move was intentional to give Fred Prehn a pretense to stay on the DNR Board though his term expired on May 1, 2021. This action means that Walker’s appointees still control the DNR Board.

Nitrates – what happened to NR 151

The DNR has long been aware of the nitrate problems that plague the state. The agency proposed amendments to NR 151, which regulates nonpoint pollution, that would have been a step in the right direction in addressing this source of pollution.

Unfortunately, because of opposition from Wisconsin Manufacturers and Commerce, Wisconsin Dairy Alliance, and other Big Ag lobbyists, the rule was blocked and time to approve the rules ran out, leaving our groundwater unprotected and those on private wells vulnerable. We wrote more about what happened to NR 151 back in November.

The DNR sent three major rules to the Natural Resources Board in February to regulate PFAS contamination in drinking water, in surface water, and set groundwater standards for certain PFAS and more than a dozen other substances, including some pesticides and heavy metals.

The refusal to pass the groundwater standards is particularly bad because there is no federal program that regulates groundwater. Without this rule the people of Wisconsin will go unprotected from the substances in the proposal.

The other two rules now go to the legislature, which can either kill them, let them go into effect, or request that the DNR modify them. Stay tuned to see what happens.

Opponents to the proposed PFAS standards made unconvincing arguments. They said we should wait for the EPA to set national standards. This wouldn’t have covered groundwater, from which many Wisconsin families get their drinking water. We don’t even have a guarantee that the EPA will set national standards. The process would take years. Wisconsin can and should set their own standards and start the administrative machinery now in order to help the people of the state much sooner.

Opponents also argued that we don’t have data to establish scientific certainty to set standards through the Department of Health Services and the DNR. We do have enough information for our state to take action now. In the last forty years whenever we have “discovered” a contaminant like PCBs, dioxins, or Halogenated organic compounds (such as PFAS), the more we learned about the toxins’ impacts to our health and the health of our environment, the more our understanding of the dangers of these substances increased.

The legislature failed repeatedly this session in its responsibility to protect the people of Wisconsin and the environment from clear and real threats. This is despite the fact that the threats to our water are present, substantial, and well-understood. Without a significant reversal in their behavior, we can expect the quality and safety of Wisconsin’s water to continue to degrade.