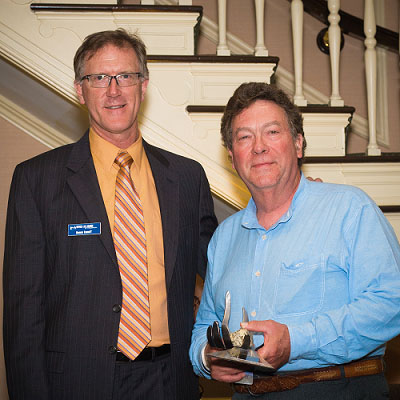 Denny Caneff with Gordon Stevenson, who received the River Champion award from River Alliance in 2012.

How to create top-down government and cut out the public with an obscure but wide-reaching law.

There are laws that quickly grab people’s attention and need little explanation. (Think of the bathroom law of North Carolina.) And then there are obscure laws, couched in obtuse language, that do serious damage to time-honored traditions of state government and move us backwards in natural resource policy.

One of these is so-called “Act 21,” passed by the Wisconsin Legislature and signed by Governor Walker in May of 2011. While most state government observers knew of this law’s ability to limit what state agencies can do, Act 21 emerged like a long-submerged sea monster last month, when Attorney General Schimel invoked it to tell the Wisconsin DNR they had no authority to regulate high-capacity water wells (i.e. 100,000 or more gallons per day).

Act 21 took “a 100-year old system of governance and turned it on its head,” observed Elizabeth Wheeler, a staff attorney for Clean Wisconsin. In the old days, state agencies could write their own administrative rules. These rules provided the details, the operator’s manual, if you will, for the broad concepts of a law. For example, the Legislature could say, “The state shall protect the surface waters of the state from industrial pollution,” and the Wisconsin DNR would spell out in administrative rules the details of how that would be done.

Let’s unpack that verbiage. Essentially, the Legislature says that no agency can do much of anything without its prior permission. The result is that “agencies no longer have any authority so the laws they’re supposed to enforce are impossible for them to implement,” according to Wheeler.

Here’s an example. Let’s say someone wants to put in a landfill to bury some industrial waste the long-term behavior of which was uncertain to DNR. In the old days, the DNR could prescribe the landfill developer what they needed to do to ensure the landfill didn’t leak or blow up. With Act 21 – remember, it says an agency can’t make conditions on any “license” (permit) without explicit permission – the landfill guy can dump his waste in the landfill without any conditions or site-specific regulation. If the legislature didn’t spell them out in a law, then they don’t exist.

“How can you approve something to be built without taking into account local conditions?” asks Wheeler. Every situation requires adjustments to ensure the resource is protected, she points out. 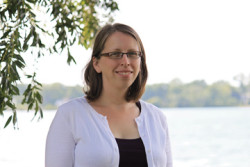 There are substantive consequences to Act 21 – natural resources will be developed or exploited with far less oversight. But there are three process consequences too. One is that the governor sticks his/her nose into the rule-making process in ways unheard of before Act 21. It is tantamount to rules never really being created or changed.

So long, public and scientists, it’s been good to know ya.

Two, with Act 21, the legislature tossed out scientific expertise of state agency staff as if it were scientology tracts in a Catholic church. State agency people come to their jobs with scientific expertise and a passion for what they are hired to do, be it better public health policy or protecting natural resources. But because lawmakers don’t want the dreaded “unelected bureaucrats” determining how policy should be implemented, that is now in the hands of 132 people who can’t possibly know all the details in the highly prescriptive laws they’re writing.

“The strong bond has been broken between science and the law. Technicians and scientists are now cut out of the loop. Think about it: the Governor’s office and most legislators won’t even acknowledge climate change. It’s a flat-earth society in charge of government.”

The third public process consequence of Act 21 is cutting the public out of the rule-making process. When he was section chief for DNR’s runoff management section, Gordon Stevenson led a few rule-making processes that “[were] very inclusive – all the major stakeholders around an issue came to the table. It was messy sometimes, and not fast, but very inclusive.” It also brought a lot of expertise to the table – from state agencies and from but the public. No longer.

“I don’t know how on earth legislators can muster the kind of expertise” to make a natural resource law protective of the resource. “I don’t know if they [legislators] even understand that expertise is needed.”

For more on how state government has been twisted and turned for the benefit of financial, agricultural and industrial interests, at great cost to good government and a healthy environment, see our summer issue of The FLOW.