Ag Dept. Makes “Producer-Led Grants.” But What Will They Lead To? 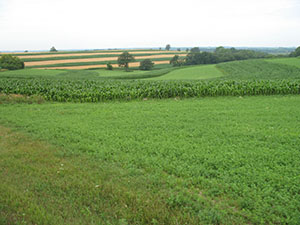 There’s much to like about a new program the Legislature funded and the state’s agriculture department administers. The agency, called DATCP (DAT-cap) by insiders, made 14 small grants totaling almost $250,000 to groups of farmers (and associated agencies or nonprofits). Here’s how agriculture secretary Ben Brancel described the program:

“All of these projects have strong farmer leadership and a commitment to improving water and soil quality on Wisconsin farmland. Each project is unique, but they all include learning about best management practices, installing conservation practices, and forming partnerships to strengthen their efforts. I look forward to seeing what they accomplish.”

Read the news release from the Wisconsin Department of Agriculture, Trade and Consumer Protection here.

But what will these farmer-led projects actually lead to? What innovations can they develop? Or another way to ask it: what is being promoted in this program that is not standard soil conservation fare?

Of the practices promoted or adopted by and for the participating farmers: will they be permanent, or will they go the way of so many conservation practices that end up getting plowed under when they’re too inconvenient to get around or the price of corn changes?

The tiny investment in the program begs the question what can meaningfully change on the landscape. But to an industry that’s extremely sensitive about its image, $250,000 is pretty cheap public relations.

We’ll be closely eyeing one project in Kewaunee County funded by this program. Peninsula Pride Farms was granted $20,000 for “protective land management practices.” Kewaunee County’s groundwater is hideously contaminated by cow manure, and to think a few field days and demonstration projects by the “producer-led” group will undo that damage is foolish. Some of the most sophisticated dairy managers in Wisconsin farm in Kewaunee. What could they possibly learn from each other that they don’t know already? And with the involvement of a former UW Extension official notorious for trying to keep farmers’ nutrient management plans private, the PR angle on this particular project could easily backfire on its participants.