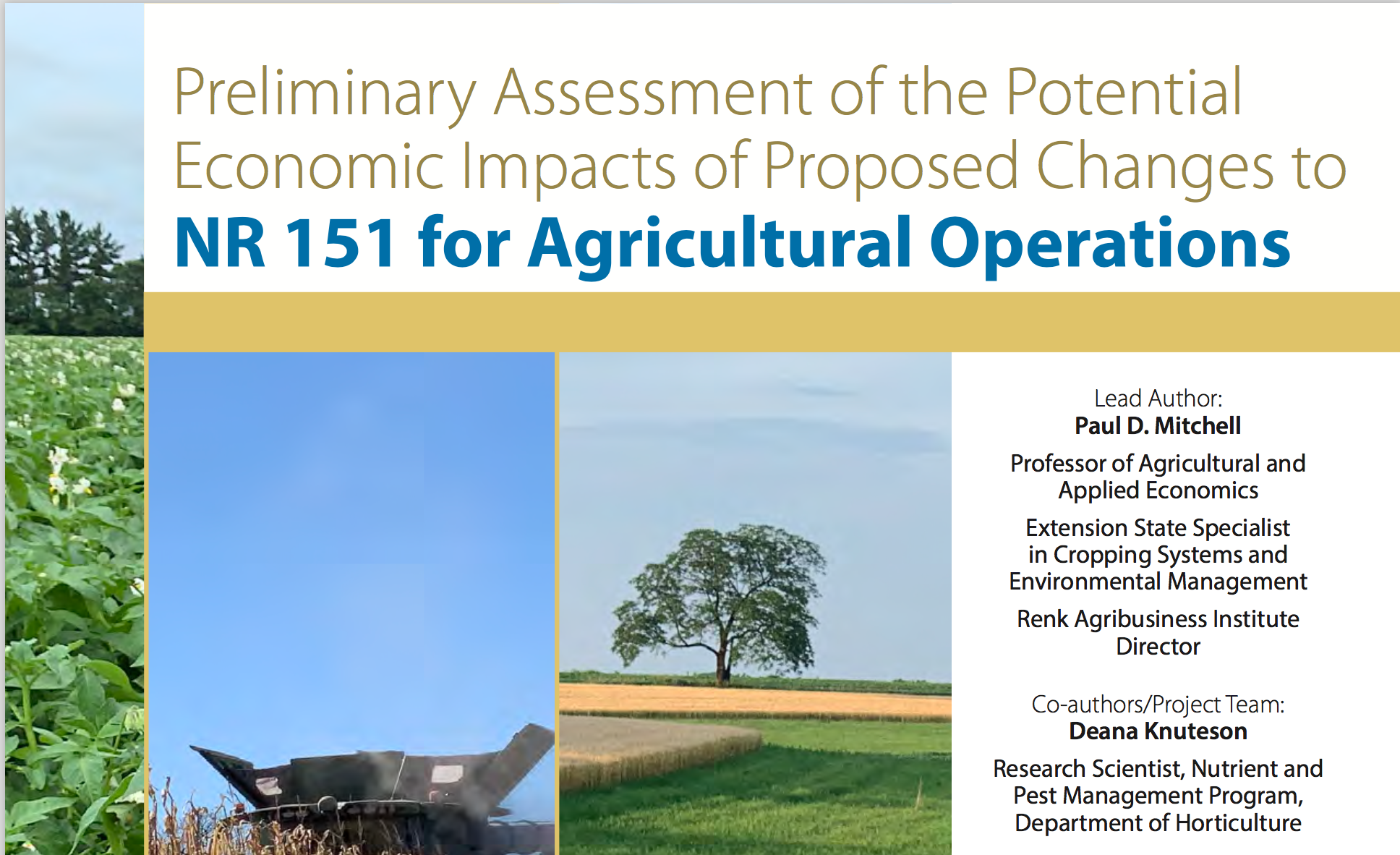 Nitrate pollution in drinking water—caused primarily by agricultural fertilizer and manure leaching into ground water—costs Wisconsinites between $23 million and $80 million every year in medical expenses. With at least 10 percent of private wells testing above safety limits for nitrate, tens of thousands of us do not have access to safe drinking water in our homes. This level of nitrate exposure causes birth defects, cancer, and “blue-baby syndrome” in which nitrates prevent the blood from carrying sufficient oxygen.

These problems are getting worse, not better, in Wisconsin. Yet a report just released by agricultural economists at the University of Wisconsin-Madison will allow industry groups and lobbying firms to argue that the costs are too high to do much about it.

The report focuses exclusively on the financial costs to farmers while not considering any of the public health or environmental benefits of controlling nitrate contamination. In the process, the report somehow manages to argue both that we don’t have the information we need to assess the costs of nitrate pollution and that we know that it’s between $22.5 million and $31 million. Even so, when we compare this to the costs of failing to implement better regulation, it’s clear that we’re primarily choosing between who pays the costs for nutrient pollution: the people who create it or the people who it harms.

And these are real harms to real people, not abstract costs. An economic analysis is a statement about what we think has value. Excluding these people from the analysis implies that they do not have value.

At issue here is NR 151, the state law regulating farmers’ fertilizer use in order to protect the health of groundwater. I was a member of the Wisconsin Department of Natural Resources NR 151 Technical Advisory Committee, composed of experts and stakeholders from across the state. We spent more than a year revising the rule to help meet worsening groundwater conditions observed since the original rule’s passage. The resulting rule covers a much larger portion of the state than the previous version. This is necessary to get a handle on the nutrient problem, and necessarily increases the cost of enforcement.

The essence of the new rule is restrictions on the use of fertilizer and manure on bare ground or at times when runoff is especially likely. It includes a number of exemptions for farmers implementing nutrient control practices like minimal tillage and cover crops. There are many farmers in the state who recognize the importance of making these changes and are actively advocating for them. River Alliance works with these groups and we can personally report the commitment these farmers have. This rule revision rewards these farmers for their effort and makes them the standard for the state’s agricultural industry.

Rules like this are important not just because they protect the environment and public health, but because they give farmers clarity about what they need to do. They also make it possible to fund targeted cost-share for implementing conservation practices. Farmers generally cannot apply for this help without such a rule in place.

The legislature may well prevent the NR 151 revision from being adopted, and if they do, their main argument for this is going to be the cost for farmers, to the exclusion of any public health, environmental, infrastructural, or tourism benefits. To produce a report that does not address this plays directly into the narrative that we cannot ask farmers to step up their efforts to reduce pollution.

The UW’s report tells us nothing that we didn’t already know — environmental protection costs money and that it would require significant changes in our agricultural practices, which are the main source of nitrate contamination in drinking water. On the other hand, when compared to what we already know about the public health costs of not implementing new groundwater protections, we should conclude that it’s only fair for farmers to share an appropriate burden in paying for water protection and cleanup. Someone must pay these costs, and this is currently the residents of Wisconsin whose taxes either fund the cost-share incentives to get farmers to comply with the law or the hospital bills when they don’t.

No doubt, the lobbying groups protecting the worst actors in the state will point to the UW’s report as evidence that any efforts to control nitrate pollution are just too expensive. Of course it’s very easy to show this if you don’t consider any of the benefits to regulating pollution and focus exclusively on the costs. If legislators side with these groups and prevent sensible changes to nutrient regulation they aren’t saving money, they’re simply determining who pays the costs and how. Is it the subset of farmers who reject the idea that they should pay anything to protect public health or the rural population that drinks nitrate contaminated water?