“Alternative facts” at play around the proposed Back Forty Mine on the Menominee River?

The plot thickens over the Back Forty Mine, a proposed open-pit sulfide mine that would be 150 feet from the Menominee River that forms the northeastern border of Wisconsin and the Upper Peninsula of Michigan.

In late December 2016, the Michigan Department of Environmental Quality (DEQ) quietly issued conditional approval for a mining permit (and a separate air quality permit) to mining company Aquila Resources, for its Back Forty Mine. In addition to these permits, Aquila must also obtain a National Pollution Discharge Elimination System (NPDES) water quality permit as well as a wetland permit in order to proceed with the mine.

While approval of Back Forty may have seemed like a slam dunk at one point, recent developments have created some uncertainty around it. First, there’s the strange case of DEQ’s announcement of the mining permit’s approval on their website, which initially indicated the project still “faces significant remaining hurdles,” but very shortly after posting, the release was scrubbed to a more sanitized headline, removing anything about “significant” or “hurdles.” (See the “before” and “after” screenshots from the website.) Was DEQ tipping its hand on its position regarding Aquila? And did Aquila or its investors, in response, turn the heat up on Michigan politicians or DEQ regulators? 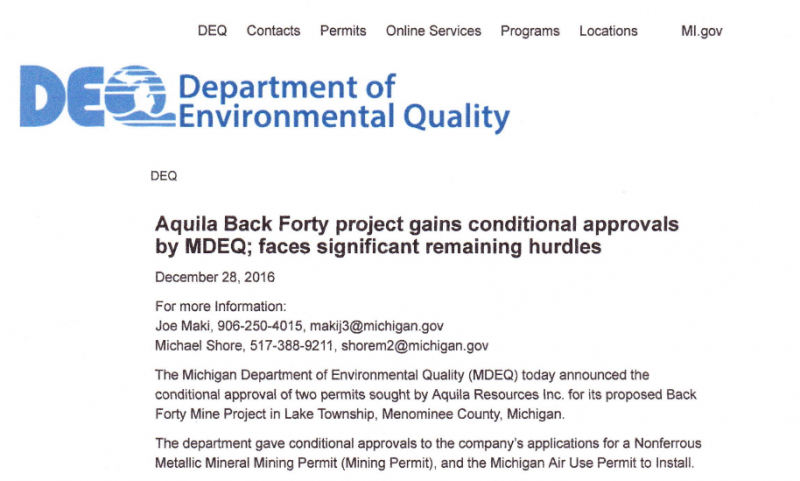 Then there’s the matter of the gaping and concerning disconnect between what’s in Aquila’s mining permit application, and what its representatives have been saying to local businesses and potential investors, to extol the purported economic benefits of the mine. There’s a not-so-small discrepancy between the type and number of mines proposed at Back Forty—a solitary, open-pit mine, as stated in the application, versus the two mines representatives keep publicly promoting (the open-pit mine, PLUS an underground mine). There are also parallel inconsistencies in the proposed timeline of the mine’s operation, or its “Life of Mine”—is its LOM seven years, as stated in the application, or 16 years, as stated on its website, and in statements to the local business community?

One would that think providing consistent, transparent information would be a priority for a massive and controversial project with so much public concern and scrutiny, but Aquila hasn’t chosen that path. So did they make an honest mistake on their application? Or, a couple of them? Or did they intentionally misrepresent information to sidestep regulatory requirements in the permitting process? Or is this just the latest proliferation of the alternative facts (lies) that seem to be so chic these days? Unfortunately for Aquila, the mining industry’s dubious legacy of mistruths and deceit grants them no goodwill here, nor benefit of the doubt.

Lastly, but certainly not insignificantly, on January 26, Michigan DEQ issued a 13-page letter to Aquila indicating that their wetland permit application was “incomplete as received,” which doesn’t necessarily represent a “win” against the Back Forty, but extends the timeline of the potential mines’ review, and hopefully offers a chance for greater scrutiny of this misguided endeavor.

We’ll keep watching Back Forty developments, as will the Mining Action Group (a new advocacy group that brings together Save the Wild U.P. and the Upper Peninsula Environmental Coalition), Protectors of the Menominee River, the Menominee and other Wisconsin Native American tribes, and other concerned citizens whose vigilance and commitment to protecting the Menominee River is admirable.