A Mine to Mind: Protecting the Homeland by Aurora Conley 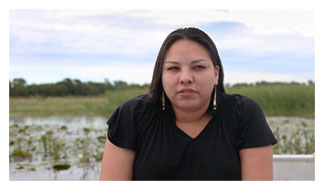 Aurora Conley grew up on the shores of a mighty Great Lake, on the sacred homeland of the Bad River Tribe of the Lake Superior Chippewa. Water is crucial to both the way of life and livelihood of the tribe, which harvests wild rice from largest remaining wild rice beds on the world’s largest lake. But the traditions and very way of life of Aurora’s family and her tribe – and the safety of their land and water resources – have been under constant threat the last few years since Gogebic Taconite announced its intention to build a gigantic open pit mine just a few miles upstream from the reservation.

A few years ago, Aurora left the reservation for a time, traveling back and forth between Wisconsin and Minnesota. She took an opportunity to serve as executive assistant to Native American activist Winona LaDuke, founder and executive director of the non-profit Honor the Earth. Little did Conley know how invaluable that experience would be as she returned to her tribe and faced the looming fight against mining interests.

Now, working in the Bad River legal department, she has put her skills and experience to use helping organize and coordinate the many groups opposed to the mine. With so many unknowns about short- and long-term health and environmental impacts, as well as a political push that seems at times insurmountable, the groups are working to protect the Bad River homeland as well as the precious natural resources of the entire Penokee Hills area.

Through it all, Aurora has also taken on another, more important job: being a mother. Raising two young boys has given her a different perspective entirely on her hopes and dreams for the future of her family and her community. “Needless to say I have very deep connections to this land and its people,” she says. “I don’t want people to be sick. I want my family to be able to harvest wild rice as we always have. I just wish for my children, and eventually their children, to have a safe and healthy community.”

Click here to hear Aurora talk about the mine and its potential impact.