The Beauty of Nothing…Is everything 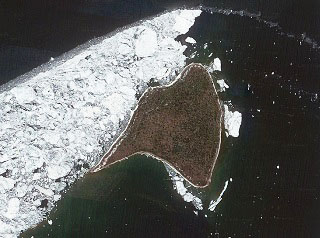 People often chat and dream about how wonderful it would be to have their own private island. They talk, perhaps, about building a dream house or maybe even a helipad to chopper in and out. It’s a place they might joke about moving when (fill in the name of your most despised presidential candidate) gets elected.

Rob Gorski, a New York City emergency room doctor with family roots in the Keweenaw Peninsula –which is in the northernmost part of Michigan’s Upper Peninsula and projects into Lake Superior– felt that visiting the area as a young boy he’d found his “Hemingway spot.”On the shores of the Great Lake and in Isle Royale National Park, he developed a nostalgic fondness for the area that that stayed with him.

And so it happened, he was waiting to possibly be called for jury duty in New York, daydreaming of purchasing some vacation land in the place he still so loved and still had family. It’s not every day you see a private island for sale on Craigslist, but there was Rabbit Island, a 91-acre forested island in Lake Superior three miles east of the Keweenaw Peninsula.

It took some deliberation, but with the help of the Keweenaw Land Trust Rabbit Island started to become a reality. Instead of drawing up plans for building and constructing, Rob and the KLT staff created a 22-page conservation easement. The island is composed of a native ecosystem standing upon solid bedrock and has never before been developed or subdivided, and the easement now guarantees it will stay that way.

Conceptually this touches on some broader ideas. “As our country developed, generations moved across it, cutting it, developing it, and now we’re faced with the reality of trying to preserve what’s left and undo the damage. People have a desire to build, and the idea with Rabbit Island has always just been to preserve what’s there,” says Gorski. Aware of this, Rabbit Island attempts a different tack. “By design, we only bring materials to the island – by boat or by walking across three miles of ice – that we can carry with our own two hands. This assures unbuilding is as practical as building, should we ever realize our rustic shelter project is errant. There are so few places that remain untouched. Wilderness is often celebrated because it is beautiful, but rarely is it celebrated because it is wilderness.”

So, while Rabbit Island will remain undeveloped, it is not going uninhabited – which is the subject of the short film Rabbit Island at our upcoming Wild & Scenic Film Festival. It has become a retreat, a learning lab, a place to quietly observe the bald eagles and great blue herons that nest in the trees and the thriving lake trout and salmon populations in surrounding Lake Superior. And, each year approximately four to six artists receive funding to live and make work on Rabbit Island amongst the forest, rocks, and wildlife; and the vast waters of Lake Superior that surround it (last year more than 200 applications were received from 37 different countries for these coveted spots)

River Alliance friend and professional photographer Hannah Stonehouse Hudson has seen similar landscapes help inform art. She recently led two workshops at the Madeline Island School of the Arts, and this summer will be creating a photography workshop with the Bayfield Middle School camera club on one of the Apostle Islands. 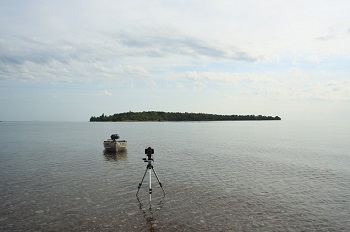 “The different types of water, the peace, the calm juxtaposed against the fierce waves and storms that blow up … It creates all kinds of opportunities for showing emotion through images,” she says. “There are endless possibilities for subject matter as well – human, animal, scenic, mineral. It never ends.”

Coincidentally, Hannah’s father Lindsay Wood Davis will be our Master of Ceremonies once again for the film festival. We hope to see you March 16 at Wild & Scenic to learn more about Rabbit Island, or explore their website for more information.