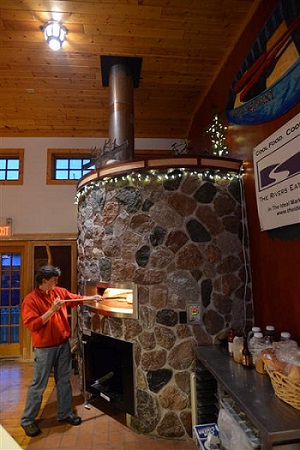 You’ll always find a member of the Endersbe family when you stop at The Rivers Eatery in Cable. Family owned and operated since 2008, the restaurant has become a popular destination among the many residents and visitors for whom Cable is a gateway to the Chequamegon National Forest, Lake Superior, the Namekagon River, the Birkie ski trails and the CAMBA mountain bike trails.

The Endersbe family – Mick, Beth, Carley and Libbey – noticed that people used to pass right through Cable on their way to other destinations, so they made their business a destination unto itself. In Fall 2007, they purchased the old Ideal Market building that friends, visionaries and local realtors Bill King and Wendy Hanneman had saved from demolition and had beautifully renovated. They then spent the winter building the restaurant and an organic grocery store (the grocery portion is now home to The Namakagon Grocer and Redbery Books).

In the years since, word of mouth has helped The Rivers Eatery grow into a local favorite and a must-stop destination for silent sports enthusiasts year round. Since it opened in 2008, The Rivers Eatery has served more than 150,000 pizzas – all specially named for local rivers – and a few hundred thousand microbrews to help wash them down. Hours, menu and additional information can be found at The Rivers Eatery website.