California to Wisconsin: A Tale of Two Groundwater Struggles 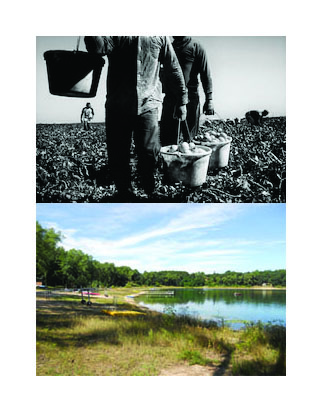 Two major issues we spotlighted last fall in our #Wish4WaterWI campaign – Groundwater Depletion and Frac Sand Mining – are among those hitting the big screen next week Wednesday, March 25, when our popular Wild & Scenic Film Festival returns to the Barrymore Theatre.

The Festival features 10 short and medium length films on a variety of environmental themes, and one thing they all have in common is their power to teach the viewer something new or to look at something familiar in a different way.

And so it goes with groundwater. The film California: Paradise Burning (photo at right) by Matt Black and Ed Kashi provides an in-depth, photojournalistic view into that state’s Central Valley groundwater crisis, which has been caused by a variety of factors including – but not limited to – overpumping and significant drought.

A similar story, although with a different and complex web of causes and effects, is playing out in the Central Sands of Wisconsin, where rapid expansion of irrigated agriculture and factory farms – and the high-capacity wells that come with it – is seriously depleting groundwater resources.

Many lakes and streams have significantly reduced water levels; some have dried up completely. Yet concerned citizens are pushing back against what can seem like insurmountable odds. “Part of being a Wisconsinite is our water, and we need to adopt a culture that cares for it,” says Francie Rowe, a Coloma resident who owns a lake home on Pleasant Lake in the Central Sands area and has been spearheading an effort for years to protect it. “Water is a finite resource that will disappear if we continue to take it for granted. We need to value it and care for it.”

Because of local residents like Rowe – and many other concerned citizens and engaged citizen groups – there is a flurry of legislative activity surrounding groundwater. Lawmakers, to date, have circulated two wildly differing proposals for managing groundwater in Wisconsin. We await a third comprehensive bill that would provide common sense, fair and sustainable protection for groundwater.

Aside from the complex and sometimes confusing legislative issues, groundwater depletion remains a very real issue with real impacts. People in Wisconsin wake up each day and slowly watch their lakes or nearby streams dry up (watch Barb Gifford talk about the Little Plover River).

Many who fight for groundwater protection recognize that we need to look for ways for industry and other water users to coexist, and we need to balance the interests of each appropriately. “We need a political shift,” says Rowe. While she acknowledges the need for better balance, she also feels very strongly, “We cannot put dairy cows ahead of a person’s right to drink clean water and property owners, both those living on and off our Wisconsin lakes and rivers, the right to enjoy them.”

So while California and Wisconsin both face serious yet very different groundwater problems – California’s is exacerbated by drought, Wisconsin’s is occurring despite normal rainfall – the common struggle might be a way to help bridge gaps in understanding and awareness. “I love that as storytellers we can take a polarizing issue and humanize it,” says Matt Black, one of the creators of California: Paradise Burning. “It contributes to the ongoing discussion and ultimately helps move the conversation forward in a productive way.”