Cannonballs Bring Reflections on the Mississippi 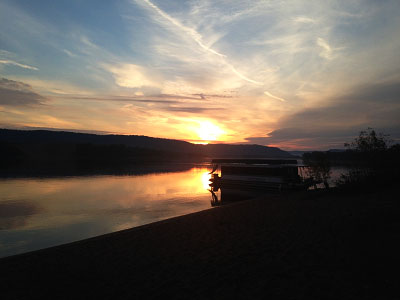 Sunrise over the Mississippi, near Wabasha, MN.

How can one river be so much fun and also so troubled?

I pondered that while doing cannonballs off the back end of a houseboat that the River Alliance staff rented in late September.  Our mission those 3  days was simple — have fun with each other and learn a bit about the Mississippi.  Did we do the fun part?  Oh, yes. Bonfires on the sand bars, early morning kayaking trips with the egrets and eagles, glorious river sunsets from the boat’s upper deck. And the cannonballs.

John talked of the navigation channel — how thousands of tons of sand have to be removed from the river bottom and dumped all along the river so towboats can run it.  With his eyes on the river’s cultural and aesthetic charms, Reggie steered us to a new brew pub in tiny Reads Landing, Minnesota, and explained how it was once a rough-and-tumble log rafting town.

Beer and sand, history and commerce

As an organization defending Wisconsin’s rivers, we have found it challenging to get a meaningful grasp on the Mississippi, our state’s “west coast.”  When I started my job at the River Alliance 12 years ago, I searched eagerly for a way to engage the organization in Mississippi River issues.  But I concluded that either you “do” the river, and do it well, or you shouldn’t “do” it all.  To be an effective advocate for it requires devotion, attention to complex federal policies, and an understanding of why it’s hard to “organize” the Mississippi.  As Reggie McLeod pointed out, there is no “center,” but a sort of top and bottom, to the river, making connecting people — the heart of organizing — logistically complicated. That’s not to mention the overlapping and contradictory policies of the 10 states the river runs through.

One good way for us to grasp is as one of 8 organizational members of the Nicollet Island Coalition.

The NIC was organized in the mid 90s to give regional and national groups a voice in the national policies affecting the Mississippi River. The Coalition calls out the outdated, costly navigation system — the locks and dams and various other appurtenances — that have shackled the river and harmed its ecology.

But it is that very same navigation system that made me conflicted about the river, at least on our outing.  The 9-foot deep navigation channel allows recreational boats like our houseboat to move up and down the river.  That, along with the considerable progress in cleaning up the river’s water (thanks to the federal Clean Water Act), has made the river more accessible than it has ever been.

Wallowing in the river’s cool waters on a warm September night, I thought of the high hurdle we face in “reforming” the navigation system on the Upper Mississippi, Wisconsin’s Mississippi — a system that contributes significantly (along with farm pollution) to the river’s considerable ecological damage.  But in my wallowing moment, I noted the flicker of a camp fire on the opposite shore, smears of pink and purple in the sunset sky, and the weight of my concerns about the river washed downstream with the current.

Reggie McLeod (center, in the hat) with River Alliance staff at Reads Landing.