Citizen Advocates and Farmers “Getting Real” on Lake Petenwell 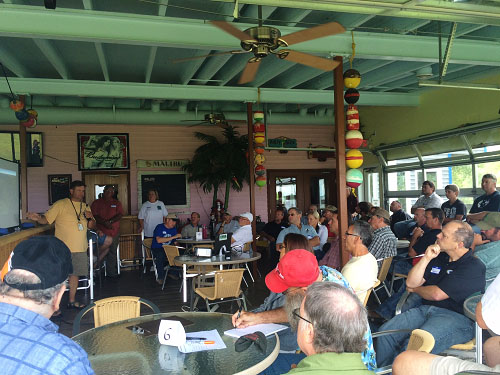 A momentous event occurred last week when our stalwart citizen group partners the Petenwell and Castle Rock Stewards (PACRS) hosted a couple dozen farmers from “upstream” in their watershed, to talk about water quality issues (and then see and smell them first-hand via a boat ride) and their shared interests in working together to achieve clean water.

PACRS has been an organization since 2007 (we helped them form, and have remained engaged as technical advisors) and since then, has been savvy about engaging decision-makers on the topic of water quality. In 2008, 2012, and again in 2014, PACRS hosted elected officials—from federal congressmen to town board members—at their “Pontoons and Politics” event, which has, without question, raised the profile of the water quality issues on Petenwell and Castle Rock (among other things, it leveraged the largest DNR water quality study of its kind on the Wisconsin River). The event also framed PACRS as exactly what they are–a reasonable group of concerned citizens interested in improving water quality. 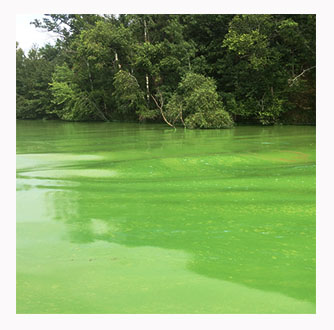 That reputation did them well as they reached out to upstream farmers from Portage, Adams and Juneau counties to talk about water quality, including acknowledging the role of “nonpoint source” pollution (much of which is polluted runoff from farms) that turns Petenwell and Castle Rock green—and sometimes a toxic blue-green—with algae every summer.

Agriculture and water quality is a subject that’s often talked about in Wisconsin, but not in the presence of farmers. And it’s not an easy discussion. Accordingly, there was some, but not a lot, of the “circling of wagons” you’d expect (and some of us are accustomed to) when this topic gets brought up in the presence of farmers. There were also some predictable talking points and myths trotted out, too. (“Per acre, waterfront lawns contribute more phosphorus than farms.”)

In a truly notable moment, though, it was a fellow farmer who stood up and talked down an overly-defensive counterpart of his who felt he was being attacked, by simply being in a room where agriculture’s impact on water was being frankly discussed. The farmer suggested that all farmers need to do a better job with respect to water quality, which was exactly what he and his Portage County contingent were doing—and aspiring to do—on their farms, and which is why he was attending. Farmer leaders like this give hope that it’s possible to make headway on this issue.

There were “real” conversations all around, with citizen advocates and farmers talking directly, asking important questions of each other. It was a vital and worthwhile day, and the farmers who took time out of their busy schedules to attend the event are to be commended. As are the PACRS, for creating a place, and a culture, where these difficult-but-necessary conversations can happen. While we don’t exactly know where this particular effort will go, it and other events like it are essential, if we’re to make real progress on cleaning up Wisconsin’s rivers and streams.