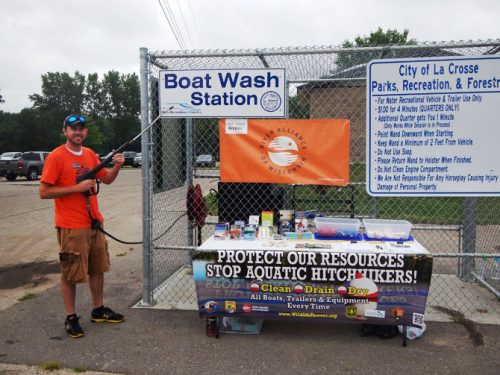 Mississippi River, Wisconsin. Lake Okeechobee, Florida. Lake of the Ozarks, Missouri. Lake Guntersville, Alabama. Sam Rayburn Reservoir, Texas. These days, you don’t have to look very hard to find a fishing tournament; varying in location and regulation, size and prizes.  But there is one thing they all have in common – fishing tournaments have the potential to spread aquatic invasive species. Tournament anglers are highly mobile, often fishing in multiple waterbodies, or even states for that matter, over the course of a few days or weeks. Increasing the risk of transmission even further, tournament equipment like measuring boards, weighing scales, and release boats can also harbor and spread aquatic invasive species as the tournament travels from city to city. Fortunately, tournament anglers are passionate about their waters and doing their part to stop aquatic hitchhikers.

Last weekend, one of the biggest and most popular nationwide fishing circuits, the Walmart Bass Fishing League, made a stop in La Crosse, WI to fish the Mighty Mississippi. Our La Crosse Area Invasive Species Coordinator, Scott Caven was invited to speak at the rules meeting and the actual tournament in front of over 300 anglers, along with their families, friends, and sponsors. He preached about the importance of not only the AIS prevention steps required by Wisconsin state law – inspecting boats, trailers, and equipment, removing all attached aquatic plants and animals, draining all water from boats, vehicles, and equipment, and never moving plants or live fish away from a waterbody – but also using a pressure washer to rinse off their boat and cleaning out their livewell with a weak bleach or salt solution.

The message was heard, to say the least. But as the old saying goes, actions speak louder than words so he rounded up some fellow river rats and took to the boat landing to help wash boats, disinfect livewells, and continue educating the lunker hunters on their role in preventing the spread of aquatic invasive species. 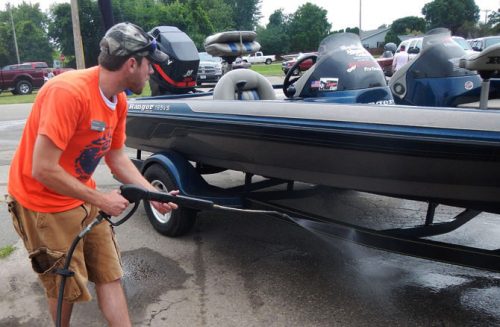 Did that message hit home? One professional angler Scott spoke with from Havana, Illinois sure thought so. “I grew up fishing the Mississippi and Illinois and it wasn’t uncommon to land 40-60 bass per day. And then the aquatic invasives moved in. Eurasian watermilfoil. Zebra mussels. Rusty crayfish. And don’t even get me started on those Asian carp! The fishery went downhill…fast. Last year I entered a bass fishing tournament on some of the exact same waters I grew up fishing as a kid, the same waters I would catch 40-60 lunkers in a day. Well, I won the tournament but I wish I would have lost. In eight hours of fishing I caught two bass for a total weight of 2.1 pounds. It was pathetic. Some of the best bass fishermen in the area were entered in that tournament and most of them didn’t get a bite. They didn’t get a bite because the bass weren’t there. They weren’t there because of aquatic invasive species.”

River Alliance reminds you to do your part to ensure you are part of the solution, not the problem! Before launching and leaving, Wisconsin law requires you to:

Help protect Wisconsin waters, and all US waters, from invasive plants and animals.