Crying Out From Kewaunee County

Crying Out From Kewaunee County

As we’ve reported in our #wish4waterWI campaign and heard from Susan Connor, Kewaunee County is soaked in cow manure. That county board just passed a resolution calling for some limits on manure spreading. The town of Lincoln, in Kewaunee County, on its own volition, is proposing that all manure storage pits be set back 1,320 feet (about four football fields) from nearby residences. Proponents are calling the proposal reciprocal: it also requires that no new homes can be built closer than that same distance to a manure pit. (As town resident resident Sandy Winnemueller wryly observed, “Who would want to [build any closer to a manure pit]?”)

These pits can hold tens of millions of gallons of liquid manure. Town residents are concerned about odors and toxic emissions from manure pits, and also leakage (though their groundwater contamination there is more likely due to manure being spread on the land rather than leaking out of pits).

The town’s elected board takes up this proposed ordinance Wednesday, October 29.

Dodge Not Dodging the Issue

In another local government attempt to deal with the excesses of manure, the Dodge County Board of Supervisors voted just last week 31-1 to pass a resolution calling on state government to convene a task force to create an “action plan” for managing liquid manure better.

It will be interesting whether state government pays any heed to the county. Residing in that county is, politically speaking, state government’s third most influential individual – state Senate majority leader Scott Fitzgerald.

We’ll be watching for the task force. 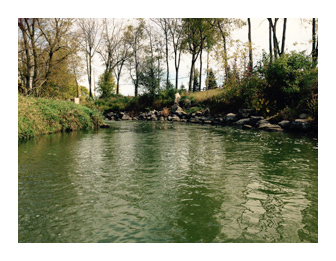 This is the Beaver Dam River (above), which flows out of Beaver Dam Lake. Its emerald hue is neither natural nor good; it is algae, the result of farm runoff that citizens in Dodge County are pushing to reform.