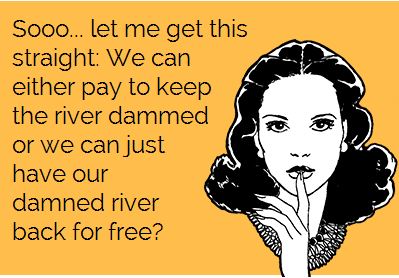 Truth be told, Yvon is really not an old personal friend, but we have a long-standing relationship with his company, Patagonia. They appreciate grassroots activism to protect the environment, and we’ve received grants from them for our work to mobilize citizens for river protection. They also helped us launch our popular Wild and Scenic Film Festival.

Restoring rivers through dam removal was our opening act some 20 years ago. We moved away from actively working on dam removal about seven years ago, but we will answer the call from good people in Wisconsin communities struggling with the decision about what to do with their dam.

We’re assisting river friends in two communities to make a compelling case for why a dam should go.

“Struggle” puts in mildly in the small Waupaca County community of Little Hope, where a decrepit dam in the Crystal River has become the source of a bitter feud that will end up in court. The dam’s defenders have offered the usual myths and misconceptions about how the world will end if the dam is not rebuilt. (Most of it has already been removed; the river is flowing freely and the old pond is gone.) We’ve been asked to explain our study on property values at former dam sites (which found that values of riverside properties do NOT go down when a dam is removed) and to showcase some success stories around Wisconsin of how some communities have made former dam sites appealing amenities.

In the nearby community of Amherst, there is no controversy yet about the village’s dam on the Tomorrow River, but there are a few questions about what the village government really wants.  While village leaders claim they want to weigh the costs and benefits of removal against repairing and keeping the dam, we found out that they have actually applied for funds from the DNR for repairing the dam.

The village president also issued a misleading communique that showed a lot more free money (from the DNR) for repair vs. removal. In fact, the village of Amherst could more than cover their costs from state money to remove the dam. If they repair it, they will have to shake down village residents for more funds.

There will be a referendum on the dam’s fate in the August primary election. A lot more community education needs to happen so Amherst voters understand their options and the benefits that would accrue to the Tomorrow River — a river important enough to the village that its image is incorporated into the community logo.

Top – This is the site of the old Woolen Mill dam, on the Milwaukee River at West Bend.  This former dam site is good enough for wedding party photographs.

Bottom – Would you take your wedding pictures in front of this concrete and steel hulk?  This is the dam on the Tomorrow River at Amherst. 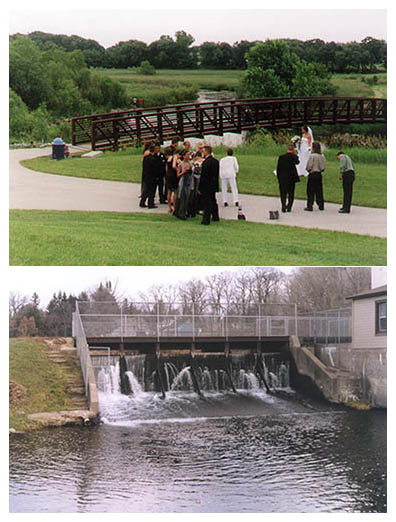