Is There Dissent in the Barn of Big Ag? 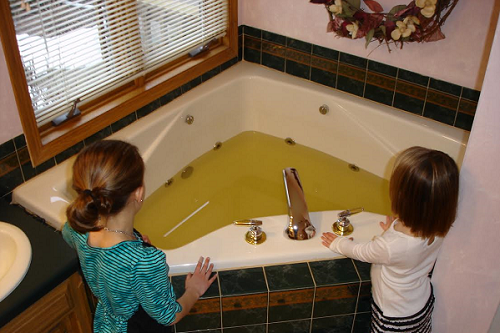 The granddaughters of Kewaunee County resident Chuck Wagner hesitate before taking a bath at Granddad’s place. That brown water came out of the tap — clear (or not) evidence manure leaks to groundwater in that county. New rules designed to minimize this kind of contamination were weakened by the dairy industry, once Gov. Walker gave farm groups a draft of the new rules.

Is there a crack in the edifice of Big Ag in Wisconsin? Is that the sound of slight discord in their amen choir?

A twitch occurred in recent days when the Wisconsin DNR proposed new rules for managing manure in areas susceptible to water wells being contaminated by said manure. In classic Walker regime fashion, the draft rules were handed over to the Dairy Business Association and a number of other farm groups for their “review.” To no one’s surprise, the rules came out of the governor’s office and back to DNR considerably weakened.

Earlier this week, the Natural Resources Board, the governing body of the Wisconsin DNR, approved this weaker set of rules, with the usual lame defense for the weakening by DNR secretary Cathy Stepp and several NRB members.

One fellow who spoke up at the NRB meeting caught our attention. Paul Zimmerman, chief lobbyist for the Wisconsin Farm Bureau, told the NRB his organization’s top priority for the next two years are these rules. You might think he meant that Farm Bureau would work to keep the rules weak. But Zimmerman also told the NRB that “we have to address groundwater contamination” and “we have to have a good image of agriculture across the state.”

This statement hints at a growing fissure between the Dairy Business Association (DBA) and Farm Bureau. DBA is extremely aggressive in its policy and legal pursuits and totally tone-deaf to public concerns about the impacts of the industrial dairy farms it promotes and represents. For its part, Farm Bureau has always cultivated the image of defending the family farm and portraying farmers as hard-working, upstanding people who care about their communities. These two agricultural titans have been butting heads over policy differences for years. Farm Bureau is rightly worried that DBA will ruin its carefully groomed image of caring farmers.

Farm Bureau’s constituency of small family farms is shrinking and the organization may be losing its primacy to DBA as the voice of farmers in Wisconsin agricultural policy. Ironically, Farm Bureau could rebuild its chutzpah by joining forces with the non-farming rural neighbors of its membership and push back against the malevolent forces of industrial agriculture that are trashing the image of all farmers in this state.