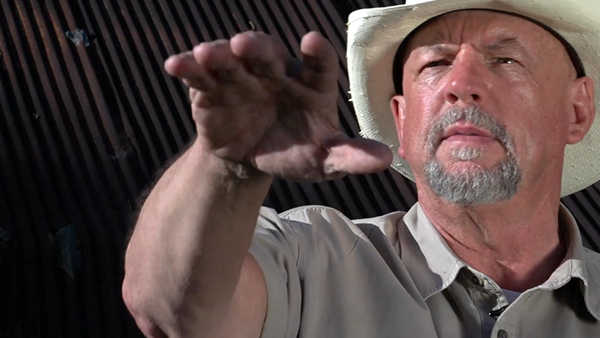 For the second consecutive year, the talented team at Carbon Nation put forth a film that caught our attention and made it into the line up of our Wild & Scenic Film Festival. Our 10th annual festival takes place in Madison on March 29, with an inaugural companion event set for April 20 in Green Bay.

Last year we wrote about Soil Carbon Cowboys, which reminded us quite a bit of River Alliance friends Dick and Kim Cates who run the Cates Family Farm in Spring Green (read the full post here). For 2017, a similar tale of sustainable agriculture—and the positive impact it has on land, production and ecosystem, alike—is Carbon Nation’s One Hundred Thousand Beating Hearts. Set amid the backdrop of what is now one of the poorest counties in Georgia, the film shows the evolution of fourth generation cattleman Will Harris from “commodity cowboy” to sustainable, humane food producer—and how throughout this process Harris breathed new life into a community that was lost due to the industrialization of agriculture.

when we’re reviewing and selecting films for the festival they appeal to us or offer a compelling argument to be included because they resonate with something happening here on the ground, literally, in Wisconsin. One Hundred Thousand Beating Hearts is a multi-faceted story, but, at its core, demonstrates people with a commitment to a better way being a force for positive change.

We’ve worked closely over the years with the Petenwell and Castle Rock Stewards (PACRS), a citizen advocacy organization that has, under the leadership of president Rick Georgeson, tirelessly led the effort to toward improved water quality on Petenwell and Castle Rock. These flowages on the Wisconsin River regularly turn green due to elevated phosphorus levels, a significant portion of which come from agricultural run-off. The result can mean the loss of business and tourism in the area, as well as diminished property values and the inability of residents and visitors to enjoy these beautiful resources.

Enter John Eron, who runs a diversified farm business in Portage County. In addition to being president of the Portage chapter of the Wisconsin Farm Bureau Federation, he heads up the newly formed Farmers of Mill Creek Watershed Council (FMCWC). At a time when the tensions between water protection groups and agricultural interests are no secret, FMCWC bridges the gap to focus on both land and water stewardship.

Georgeson and Eron have developed a somewhat unlikely yet wholly respectful and productive alliance, getting to know one another and the work of their respective groups. The first time Georgeson met him, Eron was presenting about a “closed loop” system he’s developed on his farm in which nutrient-rich run-off is captured and reused so it never makes it way to nearby waterways. Georgeson then brought a delegation from PACRS to see it in action. Later, Eron and his group paid a visit to Lake Petenwell for a boat ride that offered a first-hand opportunity to see and discuss the impact of agricultural run-off on the lakes.

We encourage you to read more about Georgeson and Eron’s collaboration and commitment to sustainable land and water management practices in the article, “Upstreamers and Downstreamers Finding Common Ground.”

Do you know any farmers or other resource protectors out there who are finding success through collaboration and a commitment to sustainable practices? We encourage you to share your stories on Facebook, Twitter or Instagram and tagging #WildScenicWI or drop us a line at [email protected].

We hope you’ll join us at the Wild & Scenic Film Festival, where activism gets inspired, to see One Hundred Thousand Beating Hearts and a whole host of other engaging and thought-provoking films.

Tickets are selling fast! Get yours today for Madison (March 29th) or Green Bay (April 20th).