This is the introductory article for the Fall 2014 River Alliance Newsletter. Click on the image below to download a pdf of the newsletter.

Wish for – but ACT too – for Clean Water 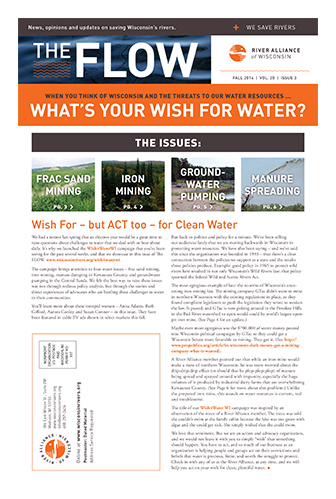 We had a notion last spring that an election year would be a great time to raise questions about challenges to water that we deal with or hear about daily. It’s why we launched the Wish4WaterWI campaign that you’ve been seeing for the past several weeks, and that we showcase in this issue of The FLOW.

The campaign brings attention to four water issues – frac sand mining, iron mining, manure dumping in Kewaunee County, and groundwater pumping in the Central Sands. We felt the best way to raise these issues was not through tedious policy analysis, but through the stories and direct experiences of advocates who are battling these challenges to water in their communities.

You’ll learn more about these intrepid women – Anita Adams, Barb Gifford, Aurora Conley and Susan Connor – in this issue. They have been featured in cable TV ads shown in select markets this fall. But back to politics and policy for a minute. We’ve been telling our audiences lately that we are moving backwards in Wisconsin in protecting water resources. We have also been saying – and we’ve said this since the organization was founded in 1993 – that there’s a clear connection between the policies we support as a state and the results those policies produce. Example: good policy in 1965 to protect wild rivers here resulted in not only Wisconsin’s Wild Rivers law; that policy spawned the federal Wild and Scenic Rivers Act.

The most egregious example of late: the re-write of Wisconsin’s oncestrong iron mining law. The mining company GTac didn’t want to mine in northern Wisconsin with the existing regulations in place, so they found compliant legislators to push the legislation they wrote to weaken the law. It passed, and GTac is now poking around in the Penokee Hills in the Bad River watershed to open would could be world’s largest openpit iron mine. (See Page 4 for an update.)

Maybe even more egregious was the $700,000 of secret money poured into Wisconsin political campaigns by GTac so they could get a Wisconsin Senate more favorable to mining. They got it.

A River Alliance member pointed out that while an iron mine would make a mess of northern Wisconsin, he was more worried about the drip-drip-drip effect (or should that be plop-plop-plop) of manure being spread and sprayed around with impunity, especially the huge volumes of it produced by industrial dairy farms that are overwhelming Kewaunee County. (See Page 6 for more about this problem.) Unlike the proposed iron mine, this assault on water resources is current, real and troublesome.

The title of our Wish4Water WI campaign was inspired by an observation of the niece of a River Alliance member. The niece was told she couldn’t swim at the family cabin because the lake was too green with algae and she could get sick. She simply wished that she could swim. We love that sentiment. But we are an action and advocacy organization, and we would not leave it with you to simply “wish” that something should happen. You have to act, and so much of our business as an organization is helping people and groups act on their convictions and beliefs that water is precious, finite, and worth the struggle to protect. Check in with any of us at the River Alliance, at any time, and we will help you act on your wish for clean, plentiful water.