This is the cover article from our summer 2016 FLOW Newsletter. Download a PDF of the full Newsletter.

A harbinger of and a case study for what was to come in Wisconsin environmental policy-making – in substance and in process — was the special legislation that Governor Scott Walker and the Legislature hustled out the door within 31 days of Walker’s taking office in 2011. You have to ask why a small wetland on the edge of Green Bay (Hwy. 41 at Lombardi Ave.) would compel an executive order, a special legislative session, limits on wetland protection AND the elimination of a legal path for citizens questioning government action in that instance.

Legislation as personal favor – the law was passed to expedite developing land owned by car magnate John Bergstrom. (It was first intended for a Bass Pro Shops store, but they bailed, stating, “We will not be in favor of doing anything to harm wetlands.” Cabela’s eventually put up a store there.) 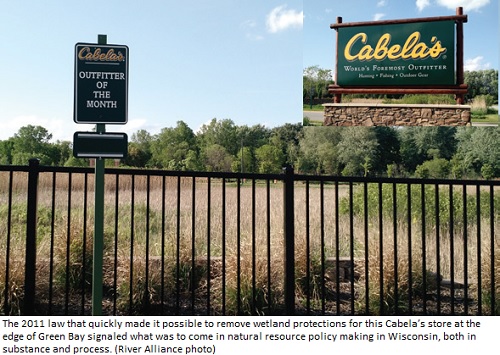 Micromanaged policy – the law was written very specifically for this wetland parcel. (But eventually all wetlands would become the natural resource bete noire of this Legislature.)

We commend the Wisconsin Wetlands Association’s diligent and dogged work to save that wetland and to call out a deeply flawed process. Little did that group – or any of us — know then what else was coming.