This is the cover article from our winter 2016 FLOW Newsletter. Download a PDF of the full Newsletter.

They’re not ducking the issues at Duck Creek

You have to love people who love a water body possessing few of the features that typically draw people to Wisconsin’s waterways.  Duck Creek will never know hordes of users:  you can’t plie it easily in a boat, even a kayak.  It is not known for its trout or bass fishery.  It doesn’t meet the definition of babbling brook.  The easiest way to access it is at road crossings.

Duck Creek is the principal vein of a huge wetland complex, called Grand Marsh, in central Adams County. When Dave and Robin Skala returned to Adams County and Dave’s home farm after many years away, in a salad mix of careers in natural resources, railroading, and social services, they began to worry about the water. Adams County is table-flat and laced with scores of groundwater-fed streams. Historically the sandy soil was terrible for most crops except pine trees grown for pulp (paper making), until irrigation was developed, and potatoes, vegetables and row crops replaced the trees. 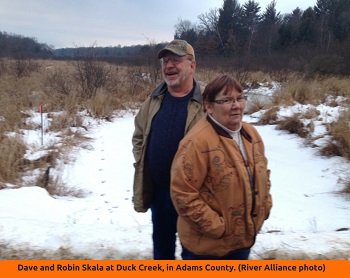 The Skalas inquired at their county land and water conservation office about how they might find out more about the water resources of their home territory and what they could do to protect them. They had two primary concerns.

“We were worried about nitrates in the groundwater,” recalled Dave, and whether irrigation was taking water from the streams. (Nitrates in drinking water in rural areas is a byproduct of agricultural fertilizers.) “I remember as a kid finding trout in a stream by our farm, and the DNR biologists told us they don’t bother to look for trout there anymore – there just aren’t any, because at times the stream wouldn’t have any water in it.”

They took the advice of former county conservationist Chris Murphy and, with his help, began to think about the watershed they lived in, and to organize fellow watershed dwellers. Robin, the acknowledged “joiner” of the couple, co-founded the Duck Creek Watershed Advisory Group with Andy Wallendal, who farmed in the watershed.

“Our first meeting, we got about 40 people to turn out,” says Robin. That was 2005. “We wanted an eclectic group – elected officials, farmers, homeowners.” The use of the word “advisory” in the group’s title was intentional, says Robin.

“The cornerstone of the group was to advise public officials, educate farmers and others, about the two big issues for Duck Creek – nitrates in drinking water, and the diminishing levels of surface waters” (another byproduct of agriculture).

But to make any case for policy change or farming practice change, they were told, they would need data. So their first activity as a group was to conduct stream monitoring, measuring such basics as dissolved oxygen and flow volume. At another meeting the Advisory Group organized, people were asked to bring a sample of water from their wells. The level of nitrates in the water of people who brought samples to the meeting was “very high,” say the Skalas.