Geo Rutherford’s artwork tells the story of the Great Lakes 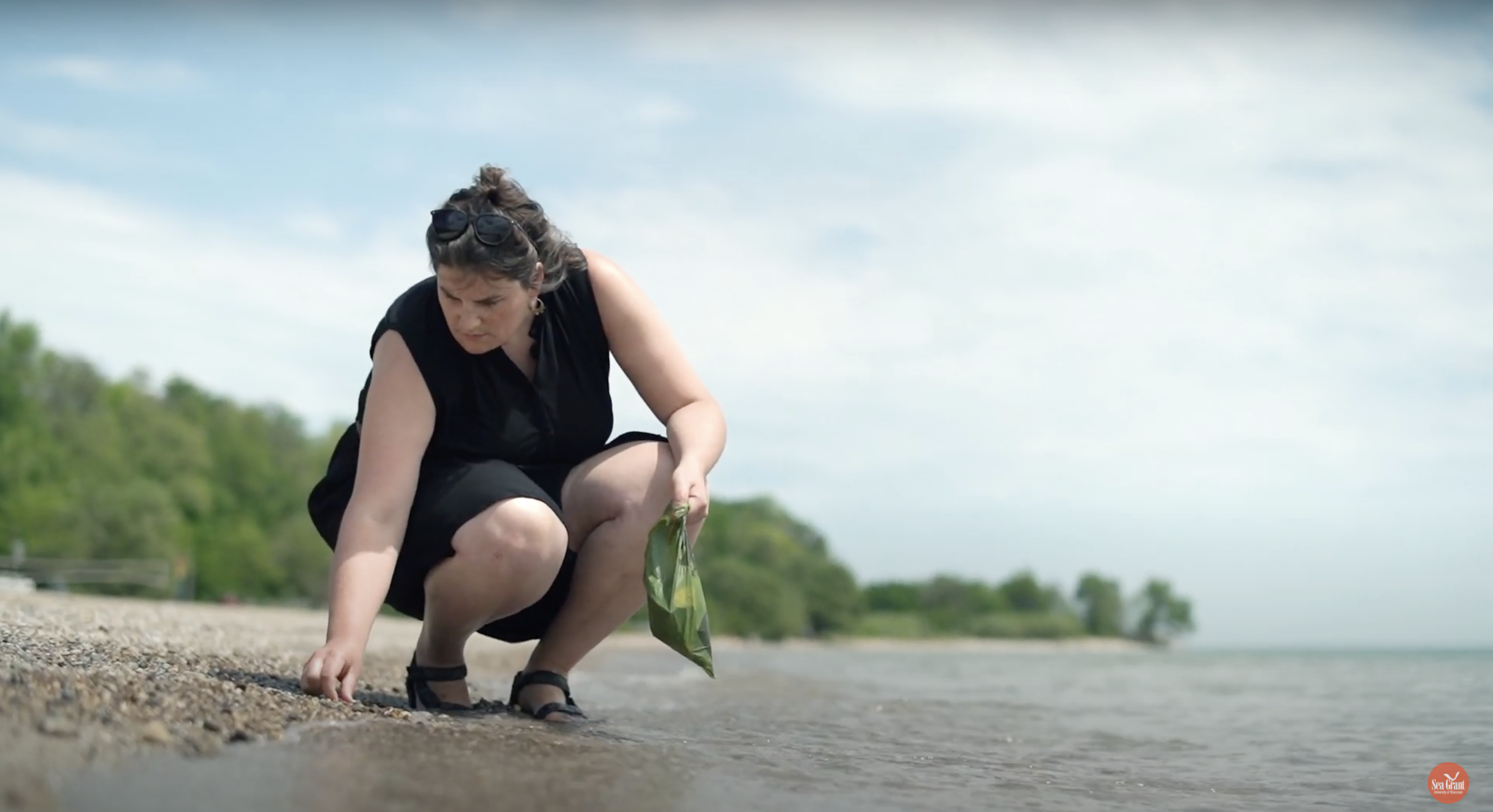 Through her art, Geo Rutherford tells the stories of the Great Lakes. Like any good novel, these stories include some good guys, some bad guys, and a long plot arc with lively imagery.

Whether or not she’s telling the Great Lakes story in book form, however, is one of the more controversial things about her work. Each Beach Finds collection from places like Manitowoc and Muskegon looks like a box of test tubes filled with artifacts from her beach walks. 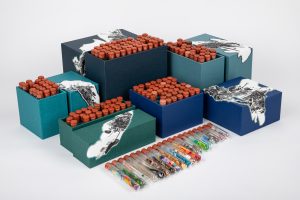 “One of the first things I made was an artist’s book and my TikTok video about it went viral,” said Geo. “It got around 1.6 million views and a lot of comments from people saying it wasn’t a book. Beach Finds asks the question, ‘what is a book?’ What if it has no pages, no spine or cover, but all the elements act like a book? You look at it and turn the tubes over like a page, one by one. And by the time you’ve gone through the tubes, you have a full narration of the beach through the materials and labels. You don’t need an art degree to connect with it. The action of experiencing it will give you clues to understanding a Great Lakes beach’s story.”

At first glance, Geo may seem like a very creative beachcomber. Driven by curiosity, her collections of man-made and natural objects from Great Lakes beaches began as a 90-day artist’s walk while working on graduate studies in printmaking and fiber arts. Her exhibits include displays of clear tubes filled with collections from her beach walks as well as prints, collages, and installations that evoke the replication of invasive species. 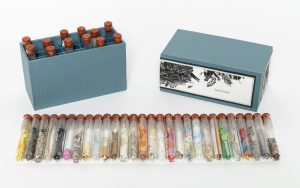 “I had no intention of collecting found objects,” she remembers. “I chose the Great Lakes as a topic for my master’s degree, but I was overwhelmed with where to start. The daily visit to the beach in the fall of 2019 helped me be present and observe the changes on the shore. I started to collect things as I realized how much was hidden in the detritus on the beach. When the Great Lakes push up materials, you can’t help but notice things like the perfect balls of dune roots or the hundreds of monarch butterflies that die in the fall. Then I started to collect plastic. Now I get more excited about plastic than anything.” 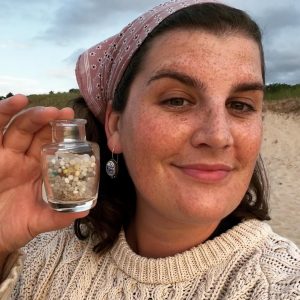 Her excitement isn’t a happy one. She’s deeply aware of the problems the Great Lakes are facing, from plastic pollution to invasive species and climate change. She describes her collections of plastic, slag glass, and crinoid fossils as the water’s evidence of both the damning man-made interventions in nature that exist alongside remnants of the pre-Anthropocene world. As she collects and sorts found objects into large and small tubes, she slowly creates a library of shorelines’ stories.

“Each beach is different,” said Geo. “You’d be shocked how different. Each beach has unique problems. Lake Erie has a lot of brick and glass. It has the biggest waves that bring up the best junk. Lake Superior is more natural. It’s the last to be touched by much plastic pollution. But there was a time when a train car that was carrying nurdles derailed. Nurdles are microplastic industrial pellets that are melted down to make plastic products. They float and rise to the top of the sand, so you can find them on the beach. My sister and I spent six hours collecting nurdles. That collection was a moment in time recorded on the beach.” 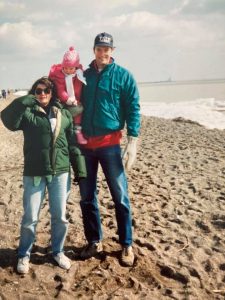 Geo’s appreciation of water didn’t begin with the Great Lakes. Her parents, now retired academics in earth science and economics, traveled and moved a lot as Geo grew up. Her summers were spent on the Atlantic shores of Ocean City, New Jersey. Her mother called her a water baby because Geo was fearless in the ocean. Her love of swimming continued through body surfing, water polo, and visits to what she describes as a “gnarly” reservoir where she lived near Boulder, Colorado. Those experiences helped her appreciate the freshwater of the Great Lakes now that she is a young adult.

Her artistic spark didn’t happen until she was a young teen when her manga sketches got the attention of her friends. Her early attempts at painting weren’t great, she admits. It was her commitment to practicing skills that eventually led her to study printmaking.

Now she balances teaching, creating exhibits, and producing lively content for social media. While she thinks she would have been a good middle school science teacher, she’s doing a lot to educate and entertain people through her science-centered work, including creating videos for TikTok that explain complex science (like this one about how cargo ships introduced invasive species into the Great Lakes), share what she’s finding on her beach walks (including this one from Lake Michigan), or show the process and meaning behind her artwork (like this one that shows the work that goes into creating a lithograph). 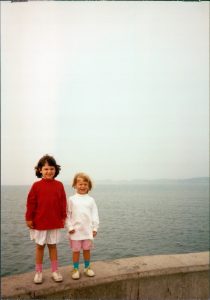 “Sometimes it feels like I’m not doing enough,” said Geo. “I do think my art is a form of activism, and having exhibits in public spaces and creating content for TikTok is doing a good job of communicating what’s going on in the Great Lakes. But I don’t see myself as cleaning the beach or making an impact on pollution. Activism, to me, would mean working with the communities of people impacted by the Great Lakes, who live near the lakes and experience the lakes. Something I’m thinking about, but haven’t done yet, is hosting a beach clean-up day. It feels more participatory and more like activism if a group of people go to their local beach to clean it up.”

Overall, Geo is optimistic about our waters’ future. She believes that we can harness the power of technology to solve pollution problems. She also feels that it’s realistic to expect that people in the future will be more concerned about how we use the limited freshwater resources than Great Lakes’ ecosystems. Geo was very influenced by Dan Egan’s book, The Death and Life of the Great Lakes. Egan writes about how nature has been able to recover and respond to disasters, but that timeline doesn’t line up with the instant gratification of human expectations.

“We can look at the invasive zebra and quagga mussels’ population that exploded in the mid-2000s. We now see their shells all over the beaches and they cleaned the water so thoroughly that they almost killed themselves off. There is an ebb and flow of species and how nature responds. How we deal with the whiplash we’re seeing with climate change feels like we are putting a bandaid on the issues, or are we responding to a problem with answers to clean it up instead of changing the behavior that’s causing it.”

Find Geo’s work on the web at georutherford.com. Follow her on Instagram @someprintlife and on TikTok @geodesaurus. ​