Honoring One of Our Own – Nelson Award Winner Denny Caneff 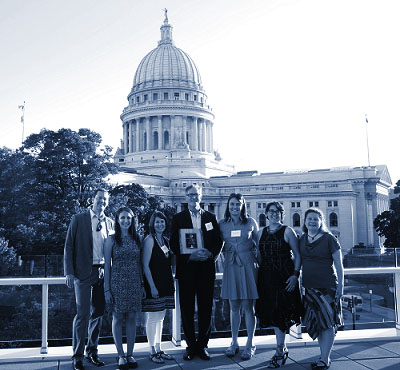 In early June, the Wisconsin League of Conservation Voters (WLCV) named their annual Nelson Awards recipients. This year was particularly special to the River Alliance as Executive Director Denny Caneff was honored with the Conservation in Action award. Two of Denny’s colleagues, Kerry Schumann (Executive Director of WLCV) and Lindsay Wood Davis (former River Alliance board member) recognized him for his lifelong commitment to conservation.

Denny’s conservation career began when he started a glass recycling club in high school, got in a local battle over a bridge expansion in St. Cloud, MN, and joined the struggle against a big power line. His interest moved toward agriculture which he explored in rural Minnesota, a Norway fjord, a kibbutz in Israel, and a save-the-family-farm organization that he ran for nine years in Wisconsin. Denny added to his conservation legacy over the last 13 years here at the River Alliance as a fearless and exceptional leader. He has tightened screws on government agencies, forged agreements with unlikely partners, engaged citizens in the important work of organizing around their local watershed, and overall increased the prominence of river and water conservation work in Wisconsin. Fellow staff members were not only proud to watch him accept this prestigious award, but also proud to call a mentor and friend.