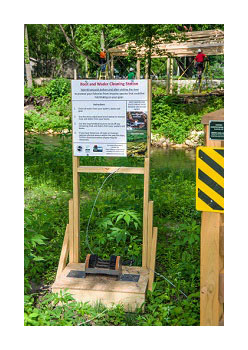 Last fall we reported that in 2014 Wisconsin DNR biologists monitored more than 75 priority streams in search of New Zealand mudsnails following their discovery in Dane County in 2013. The results were hopeful; no physical evidence of the snail was found outside of Black Earth Creek. Furthermore, state and federal researchers were using a new surveillance technique to detect DNA of the hard to find snail in water samples from 45 streams throughout the Drifteless Area. (Read the October 2014 post “New Zealand Mudsnails…Continued). We learned just last week that all of the samples from 29 Wisconsin, 8 Illinois and 8 Iowa streams tested negative for New Zealand mudsnail eDNA. This is more good news. For the complete USGS report, click here.

Despite the experts’ best attempt to detect these tiny invaders, it is still likely that they are lurking in waters other than Black Earth Creek due to their tendency to hitch a ride from stream to stream on the boots of anglers. Therefore, WDNR biologists and citizen scientists will continue to be diligent in the hunt this year. We call upon anglers and others who frequent our rivers and streams to keep an eye out too. Send pictures of any suspect aquatic snails to your local invasive species expert or the River Alliance. Include in your email, the exact location where you found it. All photos should include an object, such as a coin, for scale.

As the early trout season has now opened, we would like to remind anglers to practice clean angling regardless of what river or stream you are fishing. According to recent studies, by simply removing soil and other chunks of organic matter from your boots and waders you reduce your risk of spreading invasives by more than 88%. As we have been advocating for years, pack a scrub brush in your wader bag or vehicle to use to brush off your equipment before moving between waterbodies. Better yet, bring with you a bit of fresh tap water in a sprayer to rinse your gear after scrubbing it. It’s all about reducing risk.

While out and about in the Driftless Area, you may stumble upon one of the many wader/boot brush stations (see photo) and long-handled boot brushes that have been installed at popular trout fishing access points. These have been placed there to remind anglers to clean their gear and to provide them a rudimentary tool to do so. Whether you love or loathe this idea, we would appreciate your feedback on these installations.

Meanwhile, the River Alliance will continue to be involved in the Wisconsin New Zealand mudsnail response team.