Impaired Waters List confirms what we already know: our waters are impaired 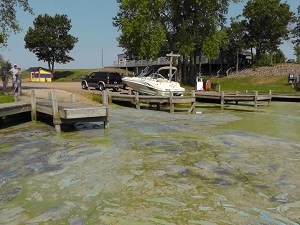 The Wisconsin Department of Natural Resources (DNR) has released a draft of its biennial list of “Impaired Waters,” or waterbodies that aren’t meeting water federal quality standards. States and other governing bodies are required to publish this list, per Section 303(d) of the Clean Water Act. The Environmental Protection Agency (EPA) also requires that states establish priority rankings for waters on the list, and develop restoration plans (via a federally-defined process called a Total Maximum Daily Load, or TMDL) for these waters.

The 2016 draft 303(d) list, available for review and comment here, lists a whopping 1,295 waterbody segments (but features 1,694 total entries, as many segments are listed for more than one pollutant, so are listed repeatedly). Of the 209 proposed new entries to the list, 61%, are impaired for excess total phosphorus, as are over 40% of existing entries.

What does all of this tell us? What we already know, if you’ve experienced Wisconsin waters during warm weather months. With some notable exceptions—the clear, “oligotrophic” lakes of northern Wisconsin, in particular—excess phosphorus is the reason many of our waters run green with algae every summer. And it’s a problem in Wisconsin. And though the DNR is dutifully fulfilling federal obligations in developing the list, will it actually improve water quality?

The short answer? Not unless organized citizens are calling for it. Impaired waters lists generate TMDLs, which can be expensive, protracted exercises in monitoring and modeling with little in the way of results…especially in the case of phosphorus from polluted runoff, or “nonpoint” sources, which, unlike “point source” phosphorus, can’t be traced to and limited by a specific, regulated permit.

River Alliance, acting on our core belief that “everyday” citizens should be involved with shaping environmental policy, has been organizing citizens statewide to advocate for their waters, since our inception in 1993. We’ve put particular emphasis on the Wisconsin River Basin, however, whose phosphorus troubles we highlight above.

Citizens’ groups from Wausau down to Wyalusing, with River Alliance’s assistance, have been engaged on phosphorus policy and particularly, the Wisconsin River TMDL, since 2008. (These groups were instrumental in getting the funding for the TMDL to begin with, a small feat that our fingerprints are all over.)

Recently, we organized a coalition of five Wisconsin River citizens’ groups to meet with DNR Secretary Stepp in support of the Department’s efforts on the Wisconsin River TMDL, and particularly in support of ensuring that the TMDL addresses the polluted phosphorus runoff problem (mainly from agriculture) in the Basin. Though the results of the meeting, and the TMDL, are still forthcoming, these representatives of the Big Eau Pleine Citizens Organization, Duck Creek Watershed Advisory Group, Friends of the Lower Wisconsin Riverway, Lake Wausau Association, and Petenwell and Castle Rock Stewards were exemplary citizen advocates—informed, respectful, willing to show their support via partnership, but also expecting results, and accountability.

We’re fortunate to have citizens’ groups like these advocating for clean water. If we are to translate bureaucratic exercises like the 303(d) list into clean water in Wisconsin, it will be up to citizens smartly but steadfastly calling for it, and working toward it.