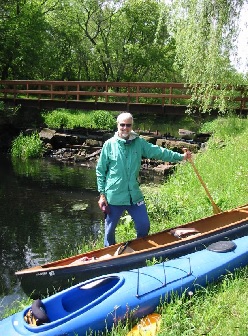 “My fascination with rivers started near my hometown of Osage, Iowa on the Cedar River. High school buddies and I fished the river and canoe-camped along its lovely limestone bluffs. In 1969 I graduated from St. Olaf College in Minnesota and soon paddled my first Wisconsin stream. With my college sweetheart I spent three days and two nights canoe-camping from Taylors Falls to Stillwater on the St. Croix River. ‘Sweet Caroline’ by Neil Diamond blared from our transistor radio as we floated this lovely stream which was designated a National Wild and Scenic River in 1968. Little did I know I would eventually explore more than 300 other Wisconsin streams.”

And so begins the introduction to Rick Kark’s epic chronicle of his paddling adventures on 309 Wisconsin rivers and streams. Rick took good notes for almost every one of these paddling excursions. A labor of love for rivers, the Guide is an unequaled compilation of Rick’s observations and advice about paddling Wisconsin streams, from the well known to the obscure. You should know pretty much what to expect if you pick a stream from any one of the volumes and use Rick’s Guide to navigate it.

We’re pleased to bring you Rick’s Guide, which is broken into seven geographic sections. Let us know if you used it and how it helped you.