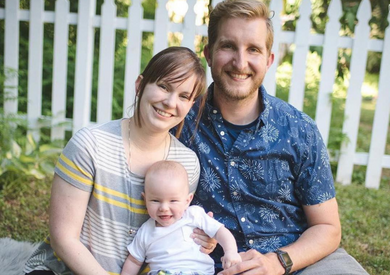 It was an ad for a house in a shoppers guide that first sparked Katy Bailey’s interest in moving to Nelsonville. She and her husband Bobby were a young couple finishing school in Oshkosh and wanted to settle down closer to where they grew up in Wisconsin Rapids.

“When we saw the home during an open house, there was something about it I couldn’t get enough of,” remembered Katy. “I thought, ‘yep, this is our house.’ When we moved in, I had in my mind that this is our forever house. We’d stay here, raise our kids here. This was it.”

When they bought their house in the fall of 2012, tests of the tap water showed levels of nitrate at around seven parts per million. It was below the US Environmental Protection Agency’s nitrate standard of ten parts per million, and Katy admits that she wasn’t concerned about water quality challenges at the time. When neighbors brought the water quality issues to local attention in 2018, the village began more widespread water testing. That’s when the Bailey’s found out their nitrate levels had doubled. And evidence of health concerns began.

Nitrate and nitrite, compounds found in fertilizer, can enter the groundwater and private drinking water wells in agricultural areas. Wisconsin’s central sands region is an agricultural area that is especially susceptible to nitrate pollution due to its sandy soils. Nitrate can reduce blood’s ability to carry oxygen, and infants can develop a condition called methemoglobinemia, or “blue baby syndrome.” The Wisconsin Division of Public Health recommends that pregnant women and infants do not drink water with nitrates and that people avoid long-term consumption of water with nitrates.

“It was the same day that we had our reverse osmosis system installed that we had to put our cat down,” said Katy about one of their three cats. “I took him to the emergency vet because I felt like something was off, though he didn’t have significant symptoms. An x-ray showed he had an untreatable lung cancer, so we made the hard decision to put him to sleep. It was a sad day, but at least we thought we had fixed our water problems. We paid around three thousand dollars to purchase the water treatment system and thought we were done.”

The next summer, Katy became pregnant. She and Bobby were excited to grow their family. Katy knew pregnant women shouldn’t drink water contaminated with nitrates, but with their reverse osmosis system, she believed her treated tap water would be safe. But by the fall and in her second trimester, Katy had a miscarriage. Adding to their grief, a second cat became ill with a digestive tract cancer and had to be put to sleep.

“It felt like the lowest point of my life,” she said. “I went into a deep depression in October and November. I was just done with the year. I’d had enough. It was very difficult. But I thought a lot about what was happening, about whether it was just a lot of bad luck or if it was something about our water, even though it was treated.”

Katy believes the string of tragedies is related to their water problems. She knows studies have shown that the risk of miscarriage increases with the consumption of nitrate-contaminated water. In fact, a local midwife has reported that miscarriages were four times higher in the Nelsonville area than in other areas in her practice. Subsequently, Katy has asked animal care professionals if she can point to water contamination as the sure culprit of the premature deaths, but doctors can’t say with certainty citing limited data and studies.

Despite all the challenges, Katy still has hope for her family’s future in Nelsonville. She successfully gave birth to a baby boy, Louis, who will turn two in December, and Katy is careful that they only drink bottled water or water that comes from an artesian well that’s about a twenty minute drive from their home.

Both Katy and Bobby channel their hope into serving as leaders in their village. Bobby has served as the village president. They both have taken turns playing active roles on local committees for parks and planning, and they stay up to date on village board meetings.

“When we first moved here, we were very enthusiastic about getting involved,” said Katy. “It wasn’t about the water then. We just thought our community could be so much more if we put some love into our homeownership and had a vested interest in taking an active role in our community. I would not have called myself an activist at that point. But now I feel like I call myself a water activist, not by choice, but for my family, for my neighbors, and for future generations. I feel like I’m playing a role where I need to be active in this fight because clean water is essential. You need it to survive. It’s still pretty crazy to me that it’s not a guaranteed right. That you have to fight for it.”

Katy’s fighting spirit has deepened her connection to some of her Nelsonville neighbors. She says she has seen a change in her community where people are taking sides: clean water advocates on one side and supporters of a large dairy operation backed by industry lobbyists and attorneys on the other.

Gordondale Farms’ expansion led to a review of their water pollution permit in 2020. Local residents pushed for water protections and partnered with Midwest Environmental Advocates to challenge the permit renewal. In August 2022, the Department of Natural Resources then required Gordondale Farms to install water quality monitoring wells to track the large dairy’s impact on the groundwater. Midwest Environmental Advocates cites the July 2021 Wisconsin Supreme Court decision acknowledging the authority of the DNR impose a limit on the number of animals that can be kept, and regulate high-capacity wells in large-scale farming.

“It’s been divisive. We know the majority of this kind of contamination comes from agriculture. What may have started as a nearby family farm has expanded into a huge business. They may think we are targeting and bullying them, but those of us who have become water activists didn’t want for this to happen. We are really just trying to drink our own water. In addition to our losses, everyone in our family has thyroid problems: me, my husband, my son and our dog. That’s why it’s personal to us.”

She acknowledges that the dairy operation is defensive of their business, but families need clean water to live. More neighbors are sharing their health problems with each other, bringing what would normally be private struggles into shared concerns. Katy says that while those who are active on the issue may feel like it’s “one step forward and three steps back” some days, they rely on each other for support, ideas and energy to be patient and not give up on clean water.