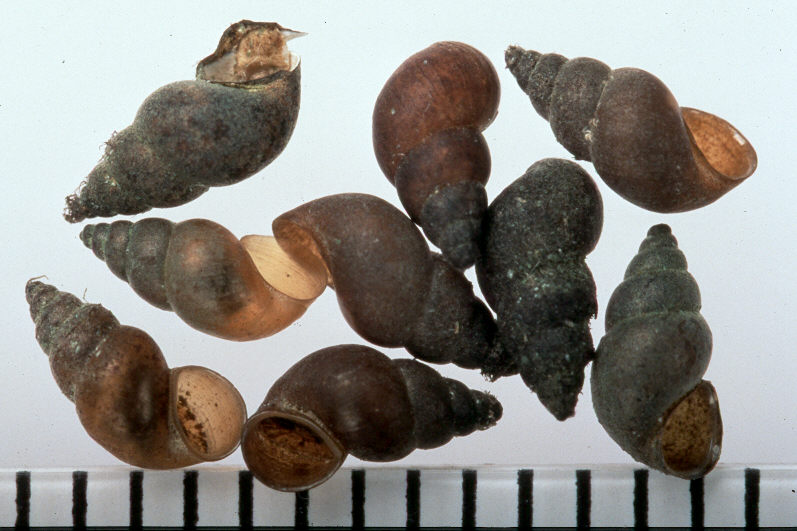 A few weeks ago, I visited Strutt Creek in Iowa County for the first time, and as I wound my way down the curvy roads leading to the stream access, I kept thinking about how lucky I am to live in such a beautiful state with so much water. I was there to collect New Zealand mudsnails for a research project, and as such, the situation felt paradoxical. From above, the scene is idyllic: the Driftless hills as a backdrop, a small gurgling stream, overgrown goldenrod on the banks, and hummingbirds dipping into an abundance of jewelweed. But look a little deeper, and you’ll soon realize that all is not well. Just below the surface, one snail species covered every available surface, from little rocks to pieces of wood to big boulders.

New Zealand mudsnails first showed up in Wisconsin almost a decade ago, and they’ve been slowly expanding their territory ever since, very likely with the help of hunters, anglers, and paddlers. Unfortunately, two new locations were added to the map this summer: Token Creek and Elvers Creek in Dane County. 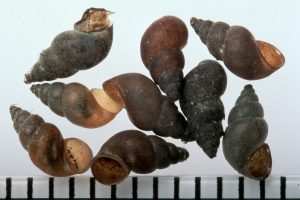 For many reasons, New Zealand mudsnails are the perfect invader. They’re so small that unless you look really closely, you could mistake them for little specs of dirt or rock. Unlike many species, a male and female aren’t required for reproduction. These snails are all female, genetically identical clones that are born with developing embryos inside them that are ready to hit the stream crawling given the chance. As such, it only takes one snail to start a whole new population. It’s a brilliant reproductive strategy from an evolutionary perspective but a catastrophic adaptation when an aquatic species finds itself on a new continent, which is our predicament in Wisconsin. New Zealand mudsnails can live outside of water in damp conditions for over a month because of a trap door to their shell (called an operculum) they use to shut themselves off from the environment when needed. Incredibly, they’re unaffected by most disinfectants, including bleach.

What does this snail do to streams and stream-dwellers? Wisconsin Department of Natural Resources biologists are working hard to figure that out. Based on reports from streams in the western US, New Zealand mudsnails can reach such high densities (500,000 per square meter) that ecosystem effects are inevitable. They’re grazers, competing for food and space with some of the native grazing species that fish (like trout) like to eat. Trout do eat New Zealand mudsnails, but studies have shown that these snails can pass through fish digestive tracts unharmed and alive. As such, New Zealand mudsnails not only provide little if any nutritional value but also potentially get a free ride to a new location when the fish evacuates.

This might all sound dire and overwhelming, but there are many reasons to be hopeful. The continued expansion of this snail is NOT inevitable. Snails move at a snail’s pace, and they can’t jump watersheds on their own. People are moving New Zealand mudsnails, and as such, people can stop their spread.

Here’s how we can keep NZMS contained:

– If you happen to fish in any of the KNOWN locations with this snail, take extra precautions! Consider fishing from shore instead of getting in the water, and if possible, have a dedicated set of waders and boots for contaminated streams. If you’re still using felt soles, make the switch to hard bottoms. Felt is slow to dry, giving NZMS a perfect habitat to live on outside water. 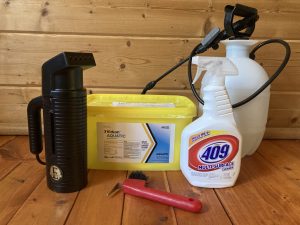 – When you’re done fishing a stream and back at your vehicle, look over your gear well and use a stiff-bristled brush to dislodge anything that might be attached, including mud. If your boots have removable soles, pull them off and make sure any material caught between the boot and sole is removed as well.  Many streams with known populations of NZMS have signage and stations equipped with boot and hand brushes to help you decontaminate. Carry a jug of tap water in your vehicle to rinse everything off before you head to the next stream.

– If you’re done fishing for the day, you can also put all your gear in a big garbage bag and leave it in a chest freezer overnight (at least five hours). Handheld steamers work too.

– Another option if you’re planning to fish again on the same day in a different stream is to spray your gear with Formula 409 after scrubbing. A new study out of Michigan showed that spraying down your gear with this cleaning agent and letting it sit for 10 minutes is 100% effective at killing NZMS. Just be sure to rinse everything off with fresh water AWAY from the stream to prevent any accidental harm to native stream life.

Fishing has become even more popular in the past year thanks to the pandemic, and NZMS may have already spread farther than we know. Current detection methods are time consuming and expensive, and as such, we’re currently working on ways to speed up the early detection process. In 2020, the WDNR, River Alliance of Wisconsin, and Upper Sugar River Watershed Association partnered with Conservation Dogs Collective, Inc. (formerly Midwest Conservation Dogs, Inc.) to see if dogs could be trained to quickly sniff out this species from sediment samples. The initial results were encouraging, prompting a second study beginning this fall to fine-tune the methods and determine the limits of detection.

Volunteer monitoring efforts are essential too. The recent discovery in Token Creek was made by citizen scientists with the Rock River Coalition out doing routine Water Action Volunteers sampling. If you’re out fishing and notice a tiny snail that looks suspicious, let us know. Your local AIS coordinator can help too; find out who yours is by searching “AIS contacts WDNR” online.

Efforts such as these are invaluable, but early detection is only part of the solution. We all have to do our part to prevent these snails from spreading further. Take a minute, have a good look, scrub for good measure, and spray and rinse if you’re in a risky spot to protect the places you fish!

River Alliance of Wisconsin submitted this article to the Trout Unlimited Wisconsin Council for publication.