How Many More Straws Can That Groundwater Take?

And Why Should You Care?

Groundwater conflicts have been in the news almost daily in Wisconsin these last few months, particularly (but not exclusively) in central Wisconsin, where thirsty, sandy soils require lots of water to grow crops. The demand for big water wells has exploded in the last 10 years, and all these straws are pumping water from the ground faster than it can be replenished. This same groundwater is the underground artery sustaining the surrounding lakes, streams and wetlands. And now these waters are going dry. It’s happening to the Little Plover River, to prairie potholes and to big lakes with dozens of homes along the shore. And as a state, we are faced with a messy and difficult conflict to resolve.

Where it gets even more complicated is defining what power the Department of Natural Resources (DNR) has to even identify overpumping of groundwater (never mind actually do something to resolve it). Some argue that even looking at this issue is beyond the DNR’s authority. Lawmakers attempted to introduce language last year to only allow DNR to consider potential groundwater conflicts around a tiny fraction of the state’s waters (1% ). Courts have consistently sent a different message: that it is the DNR’s job to consider whether there is enough water to meet all needs before granting another pumping permit.

Peppered with terms like “high-capacity wells”, “CAFOs”, “cumulative impacts”, the issue can cause most eyes to glaze over in minutes. But at its heart, the issue is simple enough for even my seven year old to understand: water is a shared resource that is not bottomless, and everyone has a right to it. Right now, one party (big ag) is benefiting, while many Wisconsinites’ personal freedom is being harmed.

DNR is the agency responsible for issuing high capacity well permits (wells that pump more than 100,000 gallons/day) and determining if they will impact other wells or lake, streams or wetlands. Current groundwater law only requires that they look for these impacts for a tiny fraction (1%) of streams, springs and lakes. But recent court decisions have interpreted the agency’s responsibility much more broadly, stating that the DNR has the authority and the obligation to protect public surface waters from negative impacts of excessive pumping.

Clearly, with the growth of industrial agricultural interests tied to these wells, there is huge political pressure to make access to water quick and predictable. Yet, you cannot legislate away a disappearing lake. When these conflicts make their way to courts, judges have consistently delivered a different message: DNR has the data, the authority and the mandate to consider whether the next straw will drain the glass for everyone else. Water is a commons: it does not belong to an irrigator, it does not belong to any one interest. It belongs equally to all of us. 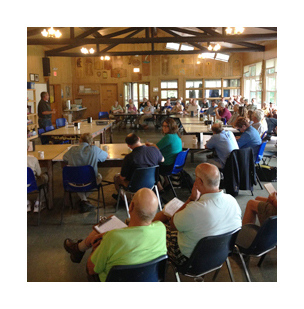 In 2011, the Wisconsin Supreme Court unanimously concluded that groundwater and surface waters are linked and that DNR is required to consider the impacts of groundwater withdrawals on surrounding surface waters. Just this fall, an administrative law judge ruled the DNR must consider the accumulated effects of groundwater use in issuing a well permit. The state’s largest dairy producer sought 26 wells for a new industrial dairy in eastern Adams County. The judge ruled in favor of the citizen groups, the Pleasant Lake Management District and Friends of the Central Sands, who chalenged the permit, stating that the DNR “took an unreasonably limited view of its authority,” and that “it is scientifically unsupported, and impossible as a practical matter, to manage water resources if cumulative impacts are not considered.” (River Alliance contributed to the legal fund of one of the citizens groups –the Pleasant Lake Management District. You can find more information about that ruling here.

When we look into our crystal ball…

So where does that leave us in terms of balancing demand for groundwater with protecting vulnerable streams, lakes and wells? We’re betting our paddles that you’ll see more groundwater legislation in 2015 and, while there are some well-intentioned lawmakers trying to find a reasonable balance, this issue is complex and controversial. If last session was any indication, we may be in for more unbalanced solutions that only benefit special interests. There are powerful interests that do not want to see limits placed on how much water anyone can suck out of the ground. Never mind if that tramples over personal property rights, economic development for towns and municipalities and good old-fashioned common sense.

River Alliance has organized a coalition of local lake and river associations with statewide conservation groups to identify key principles that should be in any serious legislation to manage groundwater in the state. Those key principles: groundwater policy should be science-based, should deal with both current conflicts and provide some certainty about how to address future water conflicts, and it should in no way roll back the protections laid out in current statute and recent court decisions.