Mining Its Own Business 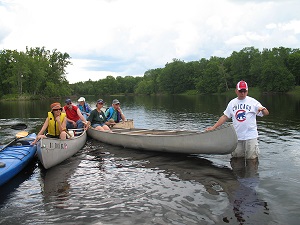 Ron Henriksen (standing in the river), of the citizens group The Front 40, shares with River Alliance members during a 2008 paddling trip his concerns about an open-pit metallic mine with mine within sight of the Menominee River, in Michigan but just across the river from Wisconsin.

Just when the collective sigh of relief from all across the state from people opposed to the proposed Penokee Hills iron mine dissipated, there’s reason to take another deep breath, and gulp, about mining.

There’s no relief in knowing a metallic (copper, zinc, gold) mine is proposed for Michigan, not Wisconsin, because this open-pit mine would sit astride the Menominee River, a superb bass fishery and recreational gem that provides the border between Wisconsin and Michigan’s Upper Peninsula. Whatever happens to the mine in Michigan will wash downstream; it’s our river, and our Lake Michigan too.

With a metallic mine (called the “Back 40” project by the developer, Aquila Resources, of Canada) come the usual concerns and fears:  mine tailings containing sulfides that could leach into the river, cyanide being used to separate the minerals from the slag, and a public review process already exposed for its flaws.

We have some unique concerns about this mining project. The River Alliance has been a partner in a project spanning 12 years and involving a public and private investment nearly $8 million to build up the depleted sturgeon population of Lake Michigan. Young sturgeon need access to good habitat in the Menominee River to survive to adulthood, so devices to move adult sturgeon around two hydroelectric dams at Marinette have been built to get breeding sturgeon to that good habitat in the river.

As River Alliance executive director Denny Caneff told the Milwaukee Journal Sentinel, one stupid mistake by that mining operation could wipe out all the sturgeon, young and old, whose survival this “fish passage” project is intended to improve.  And it wouldn’t be just sturgeon harmed, of course:  all life, and human use of the river, could be fouled for years. We won’t be turning our sigh of relief about the Penokee iron mine into a sigh of resignation about the Back 40 project.  We intend to communicate our concerns about this mine and its possible impacts to the Michigan Dept. of Environmental Quality, which is reviewing 20,000+ pages of documentation, and work with our friends in Michigan to make sure this mine gets serious scrutiny.

Here’s the story in the Milwaukee Journal Sentinel: 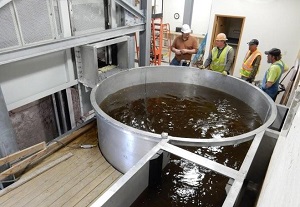 Crew members stand next to a tank filled with sturgeon that were lifted by a special elevator (left) over a dam on the Menominee River in Marinette.