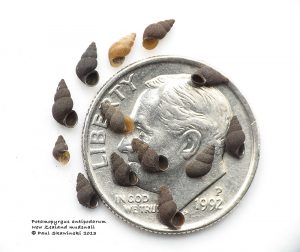 It’s been nearly a year since New Zealand mudsnails were discovered in Wisconsin (Read our blog A New Invader, New Zealand Mudsnails, Found in Black Earth Creek, October 31, 2013). The mudsnails were actually found in a macroinvertebrate sample taken in 2012 by Wisconsin DNR biologists during routine sampling. The sample not being analyzed until over a year later sat on a shelf harboring a secret that we later feared had given the mudsnails a head start. It was feasible that these sly little creatures that cling to the clothing and equipment of anglers had already been spread to other trout streams far and wide by transient anglers.

In the cold winter months after the discovery through 2014, biologists have surveyed over 75 locations (see map) and Project RED and water quality monitoring citizen scientists kept their eye peeled at dozens more for the small snail. No snails have been found outside of Black Earth Creek. That is good news not doubt; however, it does not mean that they have stayed put. These little buggers are very difficult to detect in low densities through benthic sampling.

For that reason, the Wisconsin DNR, USGS, and the University of Wisconsin have been working on developing a new surveillance tool that could in theory tell us if these critters are present in a waterbody without us having to actually find the little devils- eDNA. You are likely familiar with eDNA as it has been applied to detect Asian Carp in the Great Lakes and its tributaries. The “e” stands for environmental meaning researchers are looking for rogue DNA (ie scales, skin, feces, etc.) of a certain species within the environment. 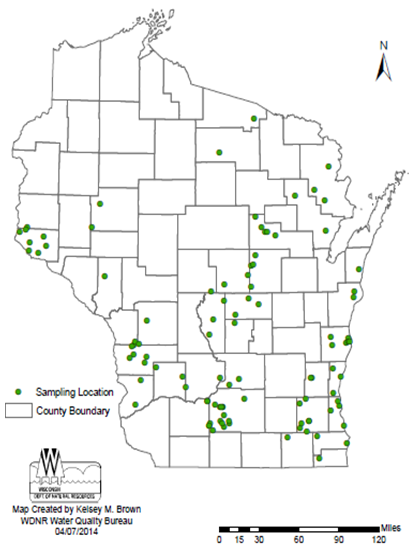 Using eDNA to detect New Zealand mudsnails has been done a time or two before out west; however, the methods needed refining. This past summer the three agencies worked to refine sampling methods and validate their finding within Black Earth Creek. Being rather confident in their results, the WDNR will sample water from 28 popular trout fishing streams around the state this month (see map to right). Illinois and Iowa are also submitting samples for analysis. Results will be released prior to the 2015 early season.

Meanwhile, we all struggle to some extent to understand what the arrival of this new invasive means to Wisconsin’s waters and our fisheries. However, we all agree on one point. Keeping these critters from spreading is the number one priority. The River Alliance in partnership with the WDNR, Trout Unlimited, and local groups have installed wader/boot brush stations, signs, and long-handled brushes at popular trout stream access points throughout the Driftless Area to assist anglers, hikers, and hunters in cleaning their boots before moving between streams. For more information on clean angling, click here.