Now That They Can’t Use Atrazine Any More…

Biologist Dave Marshall is persona non grata in rural Spring Green, where farming has an uneasy relationship with the Wisconsin River.  Area farmers know that Dave’s scientific inquiries attempt to measure the impact of farming– specifically, how does nitrate fertilizer, and how much of it, gets to the sloughs (backwaters) of one of the state’s most storied rivers, where it feeds algae and harms the small critters that feed the fish that people want to catch in the river.  (See the picture of snotty Norton Slough accompanying this article.)

As he tries to pull the curtain back, the farmers try to keep it closed.  They fear regulation of their practices will come with better understanding of their impacts on the river.  In fact, one farmer told Dave that “you took atrazine [as a pesticide] away from us. What will you take next?”

Dave’s firm, Underwater Habitat Investigations LLC, has been measuring and analyzing biological life and water quality in the Wisconsin River slough for years.  River Alliance gets grants from the Dept. of Natural Resources which Dave then uses to conduct his research and report his findings. 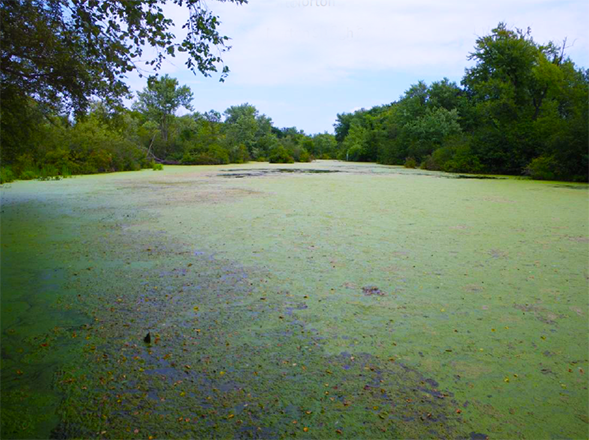 Norton Slough, one of the many Lower Wisconsin River backwaters polluted by farm runoff from on top of the ground and underneath, via groundwater.

He figures that nitrate fertilizers used in growing corn are leaching through the sandy soil and making its way to the Wisconsin River sloughs.  This is of course a waste of fertilizer:  it’s much better if it stayed in the field and fed the corn plant.  There is always some “leakage” but Dave is attempting to measure just how much is escaping the fields and oozing its way, via the groundwater, to the river and growing nice crops of algae.

To measure this leakage, he has to sink some shallow monitoring wells.  He has asked permission of the Town of Spring Green (this is the rural municipality that roughly surrounds the village of the same name) to put some of those monitoring wells in the right-of-way of the town road.

Problem is, the town board is comprised of farmers, and many of the town board’s constituents are farmers.  You could liken Dave’s request to that of a detective going to the home of a suspected bank robber and asking to get his fingerprints.

The town didn’t exactly tell Dave he couldn’t sink a monitoring well in land they control; they said they didn’t know they had the authority to give him that permission. Undaunted, Dave will seek out other well sites.  He has some (non-farming) private landowners who are willing to get a better understanding of threats to the quality of their well water.  Doug Jones, for example, has nitrate levels nearly twice as high as the federal standard for nitrates.  He’s not only interested in the data; he wants a solution, and has planted deep-rooted prairie plants that both he and Dave expect will sponge up the nitrates in the groundwater, preventing it from reaching the river.

“I’d like to see more buffers” between the farm fields and the river, Dave says. Farmers are still cropping to the edges of the sloughs, where nitrates can reach the river both above-ground and underground.

For more about Dave’s research, see this article written by the River Alliance’s Matt Krueger.

Correction: When this article was published on May 15, 2014 we mistakenly used the word “arsenic” instead of the correct “atrazine.” Yikes! 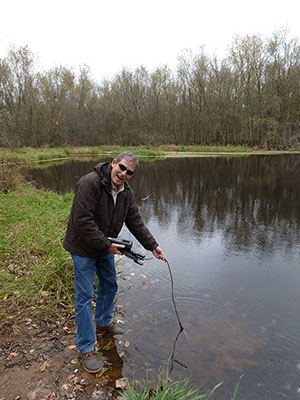