What happened to Wisconsin’s rules on nitrate contamination? 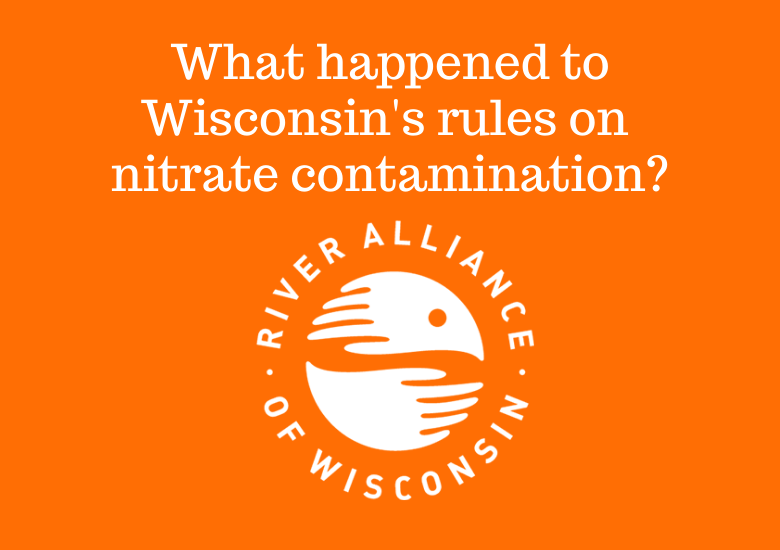 This week, the Department of Natural Resources announced that the update to the nitrate contamination in groundwater rules (NR 151) would not be moving forward. This is bad news for Wisconsin’s water and strikes a serious blow to years of study, advocacy, and work to improve our state’s laws.

The NR 151 update failed because the State Legislature has deliberately broken the rulemaking process by inserting arbitrary barriers that effectively prevent any new public health protection measures. The consequence is that many, many Wisconsinites will find no relief from the public health crisis caused by nitrates in groundwater.

Nitrate contamination: we must make human health a priority by protecting our water

Here is a fundamental reality that Wisconsinites need to confront: somewhere between 10 and 30 percent of families’ private drinking water wells in our state are so contaminated with nitrate that their water is unsafe to drink. Tens of thousands of households do not have safe drinking water coming out of their faucets.

When families have to turn to bottled water, dig deeper wells, or install expensive filtration systems, they have to pay more to protect their health from a problem they didn’t create. One example of families that are struggling with nitrate contamination is in Nelsonville in Portage County, Wisconsin.

Ninety percent of the nitrate contamination of groundwater is caused by agricultural runoff. Excess nutrients—applied in the form of chemical fertilizer and manure—are washed into surface waters and infiltrate into groundwater. This substantially raises costs for municipal water treatment and renders private wells throughout the state unsafe without expensive point-of-use filtration. When the agriculture industry does not make soil and water stewardship a priority, it passes the costs of pollution on to private citizens who must pay more to protect themselves.

One of the best tools we have to protect the health of Wisconsinites is setting clear state standards and rules that limit the amount of nitrogen farm operations are allowed to add to the already overburdened groundwater. However, the work to set standards and rules to curb agricultural pollution has been stymied by a Wisconsin State Legislature that has intentionally broken the rulemaking process at the behest of a small number of special interest groups.

There ought to be a law: improving NR 151 rules

Over the last two years, the Wisconsin Department of Natural Resources has worked to revise the state’s targeted nitrate in groundwater standards in a section of the state’s administrative code, Chapter NR 151.

The last version of NR 151 was accepted in 2018, but affected only a very small portion of the state—mainly to address the urgent drinking water problems in Kewaunee County. However, studies show that groundwater conditions are worsening across Wisconsin, and more needs to be done to limit pollution in Wisconsin’s most vulnerable regions. To update the rules for the whole state, the DNR relied on the expertise and input of a technical advisory committee made up of scientists, farmers, nonprofit organizations (including River Alliance of Wisconsin’s Clear Water Farms Director Mike Tiboris), agribusiness leaders, and public health experts.

Proposed revisions to NR 151 rules included several signs of progress. First, it broadened the scope of the rule to all nitrogen-sensitive soils in the state as identified by the federal Natural Resources Conservation Service. This would have pulled about 40 percent of the state’s land under regulation in nutrient management plans. Second, it prohibited applying fertilizer and liquid manure to bare ground in the fall when fertilizer is most likely to run off fields and get into the groundwater. The rule offered exceptions to anyone applying nutrients on top of an established nutrient-trapping cover crop in order to support farmers doing what they ought to and incentivize others to do more for soil stewardship.

So far so good. Farmers are often nervous about rules and regulations, but this rule revision represented a compromise between their interests and data-driven public health protections on our state’s most sensitive lands. No one believed that it was adequate to fully address nutrient pollution, but it was a good first step.

Despite all the efforts to make human health a priority by improving the laws and rules to address the sources of pollution, our state’s leaders have intentionally broken the rulemaking process in order to serve special interests and block the needs of the public.

This deliberately broken process began under the administration of Governor Scott Walker. First, the Governor and State Legislature changed the process when they set an arbitrary 30-month deadline for advancing rules to the legislature. Thirty months sounds like a long time, but research, public input, and compromise among diverse interests takes time (and doesn’t account for disruptions to public input such as global pandemics). Second, they imposed an arbitrary cost limit of $10 million to implement a rule in any two-year period. If, taken together, implementation would cost more than this for all the people affected, the legislature gets the option to block the regulation.

How are those costs assessed? The third and most important change made by Governor Walker and the State Legislature requires economic assessments of new rules to only consider the cost of compliance, and not their benefits. This means it does not consider the costs of inaction or the benefits to public and environmental health. This is arbitrary, or worse, designed to favor industrial bad behavior over public safety. It prevents considering how much families or municipalities pay to manage unsafe drinking water, the costs of healthcare services to manage illness caused by nitrate contamination, the costs incurred by state and local governments to respond to manure spills, impacts of polluted wells on private property values, costs to tourism from environmental damage, and so on. This is not a good faith evaluation of rules that protect the public’s interests.

Where do we go from here?

Wisconsinites should be angry that their elected officials care far more about protecting the profits of a few than they do about whether our water is safe to drink. For too long, agriculture in Wisconsin has defined success in agronomic terms of high yields rather than in terms of a healthy ecosystem that considers human health. Revising NR 151 was a step towards balancing these interests, but the majority of legislators continue to listen to an extremist subset of the agriculture industry who believe any restriction on pollution means “the end of agriculture as we know it.”

We know there is bipartisan support for clean water protections. In April, 77% of voters in Portage County approved a Clean Water Now advisory referendum to send a message to their local and state leaders that more needs to be done to protect their water. Voters in Marquette County (73%) and Wood County (76%) approved referendums as well.

Wisconsin needs to support agriculture that makes soil and water stewardship a priority.

It is simply not true–as many farmers in Wisconsin have proved–that a farm can only be profitable if it is allowed to pollute the groundwater without restriction. There are farmers across the state taking real steps toward protecting their land and our water. We cannot make progress without investing in this commitment. Recent bills proposed by lawmakers suggest there is bipartisan agreement about the importance of changing farm practices to protect groundwater. But the actual funding commitments for it are woefully inadequate.

Wisconsin Farmers Union’s policy brief goes into more detail on what the state can do to end the false choice between agriculture and clean water.

Until we improve our state’s rules to intervene in the agricultural practices that cause pollution, we have to take care of the people who are impacted by that pollution. The introduction of legislation like SB 677 and SB 678 is a tepid step in the right direction, but we have to do a lot more to remove barriers for private landowners to get financial support to replace their wells or install drinking water filtration systems.

Nitrate contamination is a public health crisis for rural Wisconsin and a massive financial burden for urban utilities. There is no realistic path forward here without much greater state investment in voluntary measures by farmers and more stringent state rules. This legislature refuses to provide us with either.