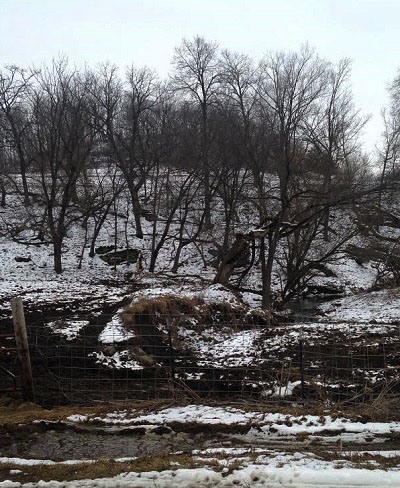 Somewhere in the foreground of this photo, amid eroded and trampled banks, runs Big Rock Creek.

A recent manure event and subsequent fish kill on Castle Rock Creek, a popular trout stream in southwestern Wisconsin, has generated more attention than usual on the topic of agriculture’s influence on water quality—particularly, trout streams. But take a look beyond these types of front-page catastrophic events, and it’s clear that many trout streams are threatened due to poor agricultural land management, as a recent trip to Big Rock Creek in Grant County revealed.

First, a few important bits about trout:  they require cold, clean, oxygen-rich water to thrive. Our native Wisconsin trout is the brook trout, and it was formerly widespread. But as landscapes were altered during settlement, waterways impaired, and non-native species introduced, many Wisconsin streams formerly habitable to brook trout became degraded, and brown trout (more tolerant of slightly warmer temperatures and more pollution) became the dominant species. Many streams altogether became unsuitable to support even brown trout, due to degraded conditions. Thus, trout streams today, due both to the sensitivity of their resident fish to pollution, and the popularity of those fish as a game species pursued by anglers, are afforded specific protections. Most of them, anyway…

As evidenced on a recent visit, a particular stretch of Big Rock Creek in Grant County, just west of the Iowa County line, is being “bovinated.” Cows are degrading the stream and the land around it to such an extent it’s hardly recognizable as a stream in some spots, let alone one that could support a viable population of trout (though it is listed as trout stream). [If you spend any time on rivers or streams in Wisconsin, you know that cattle in and around streams is pretty commonplace, despite being incredibly detrimental to rivers, and water quality. Cows trample the banks of rivers, leaving bare soil and causing erosion problems. Erosion brings excess sediment into streams, smothering out aquatic life (including fish eggs). And we all know very well what else cows doo do in streams…consider that “contribution” exactly what it is—a direct application of unwanted and unneeded fertilizer and bacteria, sure to cause problems for people or critters downstream.] 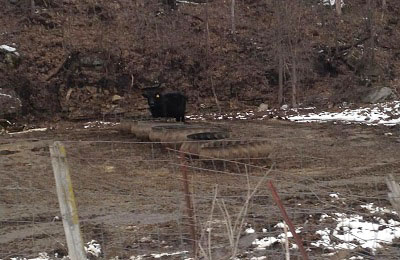 Runoff and animal waste makes its way into Big Rock Creek, a mere 20 feet from this feedlot.

The farmer in question on Big Rock Creek has chosen not only to allow his herd unrestricted access to the stream in an area featuring steep slopes already vulnerable to erosion, but also to make that area a feedlot, concentrating far too many cows on a small area of land a mere 20 feet from the banks of the stream. The pictures of this wanton abuse and neglect of the land and water speak for themselves.

Aldo Leopold said “we abuse land because we see it as a commodity belonging to us. When we see land as a community to which we belong, we may begin to use it with love and respect.”

There are certainly farmers in Wisconsin who farm in Leopold’s image, and they deserve credit. Local and regional farmers/conservationists were recently on display at both the Healthy Soil, Healthy Water Workshop in Wisconsin Rapids, and at the Red Cedar Watershed Conference in Menomonie. This “soil health” movement should be encouraged; let’s hope it continues to take root. Until it gains more widespread acceptance (and practice) by the agricultural community, though, it’s hard to accept the oft-cited phrase that “farmers are the original environmentalists,” especially when operations like the one on Big Rock Creek continue to blight the land and water. 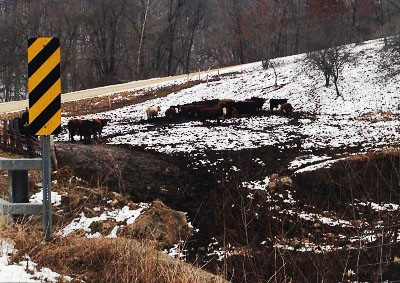 More cattle degradation of the banks of Big Rock Creek.