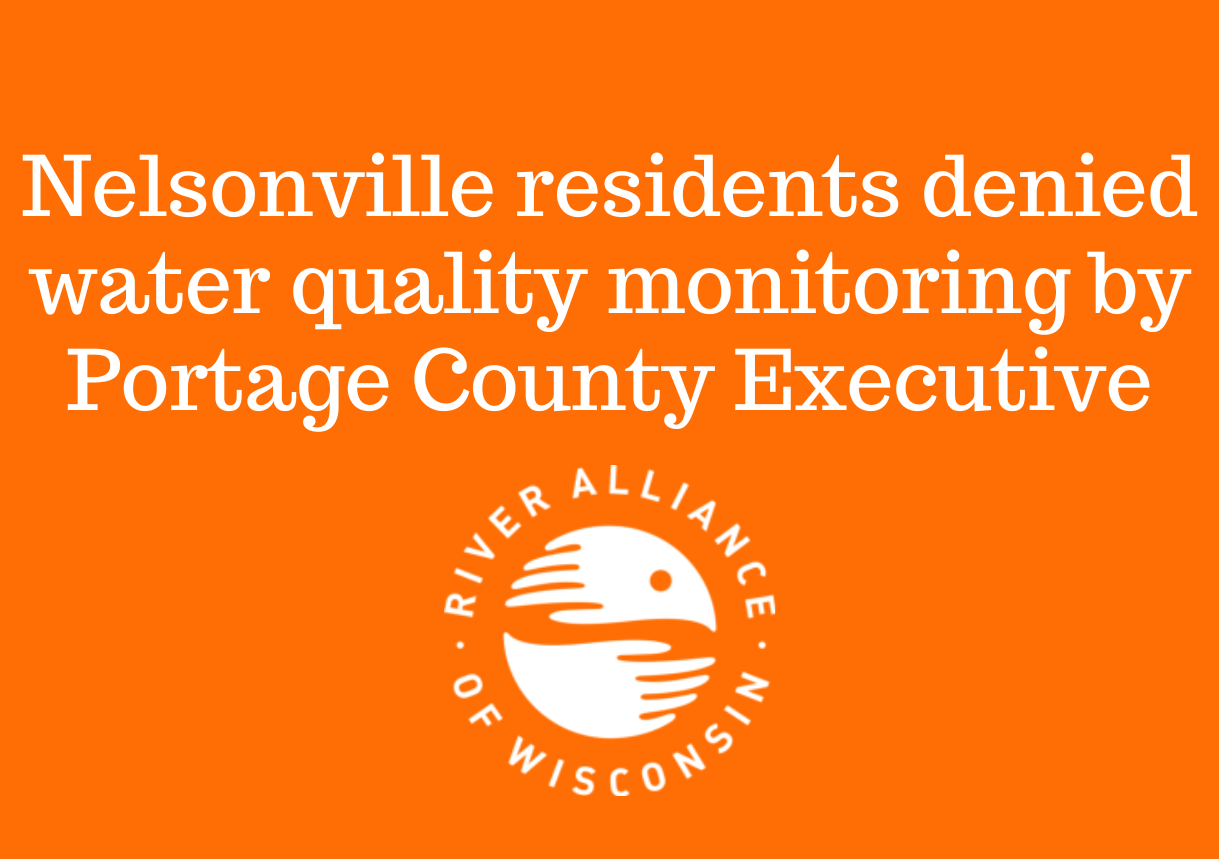 Our reality in Wisconsin

Unfortunately, Wisconsin has serious water contamination issues, and they are getting worse, not better. There are over a hundred thousand people with private wells that are contaminated.  We are finding more and more sites with PFAS contamination, we have thousands of structures that are still served by lead lateral water pipes, and we keep adding water bodies to the Impaired Waters list every year. We must reverse these trends if we are going to have clean water for future generations and our ecosystems. After all, every individual and every business needs clean water. To address our current situation requires aggressive action from all sectors to clean up existing contamination and prevent further pollution. In light of this it was shocking, but not surprising to see Wisconsin Manufacturers and Commerce and its allies try and prevent Portage County from installing groundwater monitoring wells to help protect some of its residents.

This effort involved Nelsonville in Portage County. Nelsonville is a small community that unfortunately has a long history of serious well contamination from agricultural activity. This video from the people affected in Nelsonville explains what they have been and are going through. Portage County is also one of ten counties across the state to overwhelmingly pass an advisory referendum to ask the state to establish a right to clean water. As part of their long fight for clean water they asked the county to put in monitoring wells so that they have better information on groundwater quality. Being able to better understand the problem is not an extreme ask. And yet, in response Wisconsin Manufacturers and Commerce and its close allies opposed this effort.

Why is WMC fighting something as innocuous as groundwater monitoring?

First, let’s start with who the “three” entities are that opposed this measure. They are Wisconsin Manufacturers and Commerce, Wisconsin Dairy Alliance, and Venture Dairy Cooperative. This is intended to make it look like business and agriculture are opposed to these monitoring wells.  However, these groups only represent a small fraction of the business or agriculture world.  Wisconsin Manufacturers and Commerce claims 3,800 business members but there are over 400,000 small businesses alone in Wisconsin. Wisconsin Dairy Alliance only represents the largest factory farms in the state. They don’t represent average farmers or industry, nor do they represent significant portions of their sectors.

What these groups want is little or no regulation, particularly regulation that is aimed at preventing problems. They have a long history of this. They have killed efforts to update or establish standards on PFAS and agricultural pollution, and actively worked to weaken protections on mining and wetlands to name just a few.

In this case, they say they want the people affected to have their wells replaced instead of monitoring. What we need for now is both. We should help those who can’t use their water, but filters and the like are not the solution. They are only a bridge to give us the time to get to the point where these stop gap measures are no longer needed. Replacing wells does not remove the contamination from the groundwater and ignores the fact that they don’t have a right to pollute our water in the first place. What they are hoping for is that if people’s wells are replaced, they will be quiet about the pollution. More insidiously, WMC has worked to prevent the public sector from collecting information about pollution. For example, WMC sued the DNR to prevent it from sampling for PFAS. That is because this information is then publicly available and can be used to point out the sources of pollution and hold them accountable.

What we expect from Agriculture

And instead of having a civil debate on the issue, WMC went out of their way to vilify the people who can’t drink their water by saying that those who are asking for monitoring wells that will give them information to help them protect their families are “anti-agriculture.” They are nothing of the sort, but these kinds of statements in a farming community can cause real harm to reputations and relationships. All these residents want is for agricultural producers to be good neighbors and not contaminate the water with their practices. That is not an unreasonable request.  If agricultural interests cannot achieve that with their current practices, then they need to change their practices and not put the burden of their failure on the public. In short, it is not unreasonable to expect agriculture to farm in ways that do not pollute.

Besides name calling, WMC presented a “legal argument” in this memo that is the worst kind of lawyering; full of sound and fury, but means little, and intended to intimidate the county board by making them think they do not have the authority to protect their residents.

Their argument is that nothing in Wisconsin statute specifically says the county can put in monitoring wells. That is not the same as saying the county can’t do it. Counties have been given broad powers by the legislature to act to protect their residents. Section 59.03 (2) states in relevant part:

“…except as elsewhere specifically provided in these statutes, the board of any county is vested with all powers of a local, legislative and administrative character, including without limitation because of enumeration, the subject matter of water, sewers, streets and highways, fire, police, and health, and to carry out these powers in districts which it may create for different purposes, or throughout the county, and for such purposes to levy county taxes, to issue bonds, assessment certificates and improvement bonds, or any other evidence of indebtedness…”

In fact, the way the statute is written is that the counties can act unless they are prohibited to by other sections of state statutes. In this instance, there is nothing in state statute that specifically prohibits the county from putting in monitoring wells so it is permissible to do so to help protect the health of its residents clearly fits within this language. This interpretation is bolstered by analogy by the most recent 2021 state supreme court cases (Clean Wisconsin v. DNR, and Clean Wisconsin and Pleasant Lake Management District v. DNR) that stand for the proposition, among other things, that a general grant of authority such as here in section 59.03 (2) is sufficient. In addition, the reference to the Lake Beulah decision and the language on high capacity wells is not relevant. This is a monitoring well, so it is not going to be drawing more than 100,000 gallons per day, i.e. it is not a high capacity well. This language is meant to look impressive, but it is meaningless in this context. This is the kind of thing to expect from WMC.

So why are we bothering to mention all of this? It is because we expect WMC and its allies will continue to use these kinds of tactics and we want you to be prepared. If you run into something like this from WMC or its allies as you are doing your work, don’t panic. Educate your local government officials on what is really going on and push back on this kind of attempted bullying.