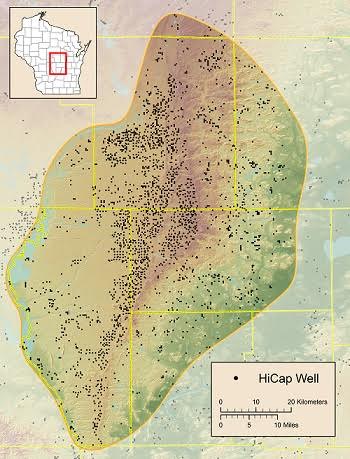 There are nearly 3,000 high-capacity wells (i.e., over 100,000 gallons per day) in the Central Sands region, almost all of them used for crop irrigation.

You can serve up your potatoes in many forms: mashed, hash browns, au gratin, French fries, American fries. If you’re looking for a hearty helping of potatoes sautéed in propaganda, look no further than this 30-second serving from the Wisconsin Potato and Vegetable Growers Association.

In this ad, fake potato farmers make the claim that trees use more water than irrigated potatoes. I know: this makes no intuitive sense. But how can they say that? An inquiring scientist asked the growers on what scientific basis they make this claim.

They site research from places like Australia conducted on eucalyptus trees. The grower group also ignored research done by Wisconsin scientists, done in Wisconsin, that shows that in fact crops use more water than trees, here, in Wisconsin, in the place the potato growers do their growing.

What’s behind this misinformation?  (We haven’t mentioned another bit of information simply left out of their ad:  they irrigate everything in Central Sands region of Wisconsin, not just potatoes.)  The growers are under pressure to stop drying up lakes and streams with their unfettered use of groundwater for crop irrigation.  In facing up to their responsibility for this water crisis, they move from denial, to deceit, to excuse, to dissembling, and back again.

The ad is part of that verbal dance. But the potato boys’ ad is like dancing on your hands – looks bad, it’s hard to do, and eventually you fall on your face.