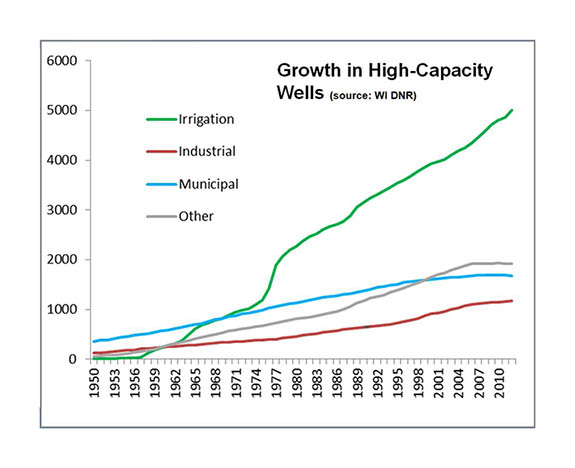 The Wisconsin legislature is scrambling to finish up its business by the end of the month. This means that the bad bills we’ve been monitoring might either quietly go away, or be rushed through in a last second push. We want to make sure that the retrograde groundwater bill, SB302/AB679, does not make through the final push.

In 2004, Wisconsin passed a groundwater protection bill – an important first step toward sustainable management of groundwater by recognizing that if you pump water out of the ground too close to streams and lakes, they can dry up. That bill was a start, not an end point.

Since that bill was passed, groundwater pumping in the state has exploded. Most of these new wells are for crop irrigation. The number of requests to DNR for high capacity well permits – wells that pump more than 100,000 gallons of water from the ground per day – for irrigation alone increased from 166 in 2008 to 305 in 2013. Most of them are concentrated in one portion of the state: the Central Sands, (although they are increasing in other areas of the state, like western Wisconsin).

Meanwhile, lakes and rivers in the Central Sands are drying up. In some cases, entire lakes are so dry they are growing trees and grass. Scientists have been able to connect the dots showing that drying up surface waters is directly tied to excessive pumping. The DNR was given clear authority in a 2009 unanimous Supreme Court decision that they needed to consider impacts of groundwater pumping to waters of the state.

Additionally, the bill turns a permit to pump water into a property right that is attached to that parcel of land forever.

Instead of giving DNR more tools to resolve a complex issue around a resource we all depend on, this bill nails the toolbox shut. And lakeshore and river property owners are left, literally, high and dry. SB302 is so retrograde that no amount of amendments can fix it.

Call, write, speak to your legislator and ask them to oppose SB302.