Requiem for a River 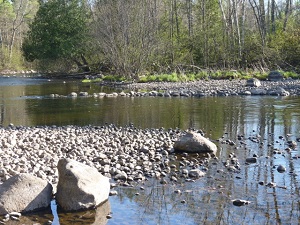 Buried in the 1,500+ page state budget signed last Sunday by the governor were a few sentences that are in effect a death sentence for a river in northern Wisconsin.

The Manitowish River is a Northwoods stream that winds its way westward through Onieda County and flows through several lakes before it turns south and joins with the Bear River to become the North Fork of the Flambeau River. For decades, a dam where the river exits Rest Lake has been managed to the advantage of lakeshore property owners and to the deep detriment of the river.

That dam and its damaging ways was saved by legislative fiat.

For at least the past 10 years, local river advocates have called for managing the flows from the dam in respect for the river, downstream property owners, and the fish and other critters in the river. But the water level of Rest Lake was lowered in the fall so lakeshore property owners wouldn’t have to remove their docks. Removing docks is a fall ritual that almost every lake cabin owner in Wisconsin does, but the lucky souls of Rest Lake got used to being spared this chore.

In spring, to raise the levels back up in time for boating season, the dam’s gates were partially closed, thereby starving the Manitowish River of water at a time when fish spawn. Downstream river property owners would find mud flats where water had been the day before.

River advocates had had enough, and in 2012 called on the DNR to do an environmental assessment. The DNR did it, and it was just what you would want in such a study. It looked at ecological, economic and social factors in why the dam was managed the way it was, and what might be improved ecologically if water levels were not raised and lowered so drastically.

The DNR then issued a draft “flow order” that did a good job balancing the many interests fighting over the water of the Manitowish chain. Meanwhile, hovering over the entire process all these years was an entity called the Manitowish Waters Defense Fund, a consortium of lake associations, business and local governments whose interest was to keep the dam operating its damaging ways. “Defense Fund” may reveal something about their intentions; the DNR always understood that a decision against lakeshore interests would end up in court.

Fearing litigation and succumbing to local political pressure, the DNR pulled back on its process to implement the flow order last year. Things went quiet for several months until we learned of near-secret negotiations this past winter between DNR and the Defense Fund. We should mention here that that have been two DNRs at work on this – local staff did yeomen’s work with the environmental assessment, but administrators in the Madison central office chose to ignore their own agency’s good homework in the environmental assessment.

The MOU was a terrible process and document; in many ways its provisions would have been worse for the river than the existing flawed system.

To the rescue of this already messy process was something even worse – the heavy hand of one state senator, Tom Tiffany, who inserted a few sentences into the state budget that essentially prevents DNR from regulating the Rest Lake dam without permission from the legislature. This is now the law.

What happened to the Manitowish River is a case study of how far we have fallen in resource conservation. The Manitowish River now has upstream winners – well-connected and wealthy people who know how to use their influence to get what they want – and downstream losers without the same clout. Tiffany’s bill practically makes the Rest Lake chain a private waterway, in a state that prides itself in managing water in the public interest. Indeed, such public interest is enshrined in the state constitution.

Several good souls who have worked tirelessly to protect and defend the river deserve mention. John Bates and Mary Burns are riverside denizens whose deep study of the Manitowish was published in John’s book River Life. Greg Holt was the sole representative of “downstream interests” in the MOU negotiations. For years Greg patiently and diligently tried to represent river interests in a setting where he was clearly outnumbered. Bob Martini, retired DNR state rivers coordinator, saw the Manitowish case a fine opportunity for instituting a “flow regime” for a Wisconsin river. It would have been a first, a breakthrough for managing rivers in Wisconsin. And kudos to regional DNR staffers whose environmental assessment by which they marshalled both natural and social scientific evidence in an attempt to bring balance to a distorted process and save a river.

That work was tossed aside, politics and money prevailed.

May the river gods bless the Manitowish River.