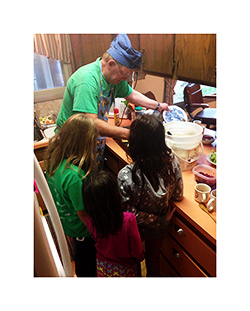 Over my fourteen years of living in Wisconsin and working for the River Alliance of Wisconsin, I’ve been lucky to spend many good hours in a boat on a river. Less frequently, I’ve kayaked some of the lovely whitewater that our state boasts. But until recently, I’d never done any whitewater paddling in a canoe.

So needless to say I was pretty excited to embark on my first paddling trip in a canoe on a sweet little river dotted with rapids and even a class IV waterfall in late August. My family and some good friends had the privilege of spending the day on the Red River in Shawano County with one of its great paddling ambassadors, Charlie Friske. The event was actually a River Alliance auction item donated by Charlie that promised “Sourdough pancakes by the water and a day of fun family paddling and swimming on the Red River.” Who could resist pancakes and paddling?

So on an unseasonably cold August morning, we gathered at Charlie and Katherine’s cottage, welcomed by the heavenly combination of coffee, bacon and pancakes and got to know each other. The pancakes were not just delicious but also pedigreed: the sourdough starter was passed down from his family and dated back to 1926. 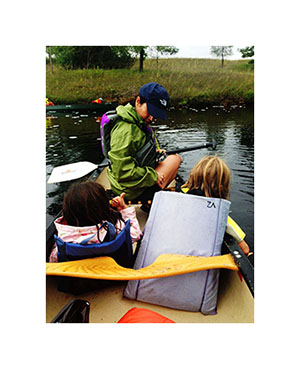 The paddling was everything Charlie promised and then some. We all got to try running rapids in our canoes with the kids body surfing down many of them. The water was high that day so I will confess that most of my successes were attributable to good equipment and dumb luck (my paddling partner and I ran the first rapids backwards, just to give you an idea of our – ahem – prowess). But we slowly got the hang of it and eventually I even mustered up the courage to join Charlie as he ran the canoes through the class IV waterfall! Unfortunately (or perhaps fortunately, given my rather inelegant paddling “style” on that first rapid), the pictures ended promptly when the rapids began so I can’t show you the body surfing races, the confident, capable river running of our group or the fabulous waterfall maneuvers.

The day was idyllic, despite the cold. Lots of good paddling, swimming, laughs, thrills, great conversation and a reminder that Wisconsin really does have so many gems tucked away that we are still discovering them a decade and a half later. My husband and I marvel how these hardy ‘Sconnie kids of ours are darn lucky to experience such beauty in this state as a normal part of their childhood. And most of all, this trip was yet another reminder that Wisconsin is filled with big-hearted people like Charlie Friske, who never tire of being a teacher (even after retiring from a career of being one) and an enthusiastic advocate for a home river. People like these are what make this job so deeply fulfilling for us here at the River Alliance.

If this trip sounds of interest to you, make sure to check out our 2015 Online Auction taking place November 27- December 6 to place your bids! BIDDING IS NOW CLOSED.