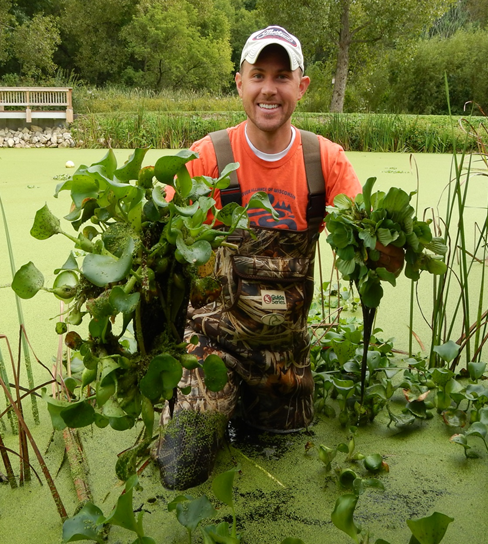 On September 9, 2015, Scott Caven, our Aquatic Invasive Species Coordinator based out of the U.S. Geological Survey’s Upper Midwest Environmental Sciences Center in La Crosse, received a phone call from someone reporting suspicious aquarium-looking plants in the Vietnam Veteran’s Pond at the Chad Erickson Memorial Park on the southside of La Crosse. Now, Caven is no stranger to receiving reports of suspicious plants and animals but this phone call was different. Normally the voice on the other line reports species that are relatively common in the Upper Mississippi River watershed like Eurasian watermilfoil, purple loosestrife and zebra mussels, not aquarium-looking plants discovered in ponds. Caven sprang to action. He grabbed his waders, loaded up his kayak and headed to La Crosse’s southside. Once on site, Caven discovered two aquatic invasive species, never-before-seen in La Crosse County – water hyacinth and water lettuce.

Water hyacinth, native to South America, and water lettuce, believed to be native to South America and possibly Florida, are two of the most problematic aquatic invasive species in the United States. They are ornamentals in the aquarium and water garden trades and are primarily spread by humans, both unintentionally and intentionally. Boaters, anglers and other outdoor enthusiasts can also transport water hyacinth and water lettuce via boats, trailers and equipment. Water hyacinth and water lettuce can thrive in freshwater lakes, rivers, ponds and other waterbodies, and can form dense mats of vegetation that can entirely cover the surface of the water, significantly degrading boating, fishing, swimming, paddling and other recreational opportunities. They can also reduce biodiversity, degrade water quality and reduce spawning and nesting habitat for fish and wildlife. Because of the detrimental effects they can have on the environment, economy and recreation, the Wisconsin Department of Natural Resources clasifies both water hyacinth and water lettuce as prohibited species under NR40, Wisconsin’s Invasive Species Rule. As a result, neither species can be transported, transferred, introduced or possessed without a permit.

Understanding the importance of educating the public on aquatic invasive species related issues, like not releasing aquarium plants and animals into public waters, Caven contacted local media outlets to spread the word. Caven worked with media outlets in Wisconsin and Minnesota, including News Channel 8, News Channel 19 and the La Crosse Tribune. He will continue to monitor the pond and nearby waterbodies this fall and during the 2016 field season to ensure neither species return.

Check out the video or article for more information on how the River Alliance of Wisconsin is protecting Wisconsin’s water resources from aquatic invasive species! 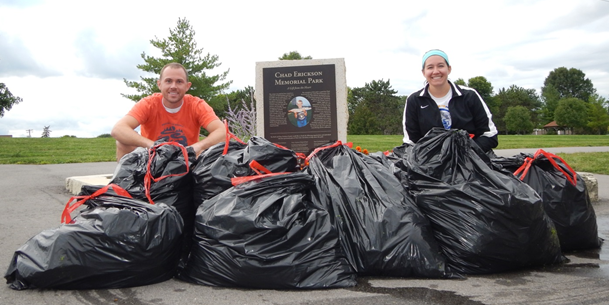