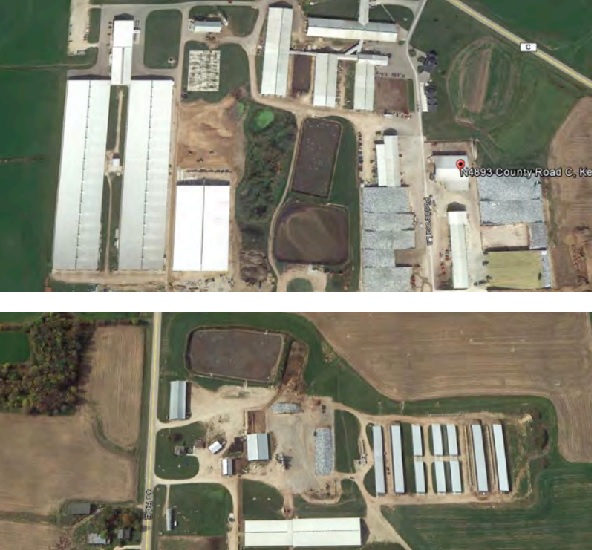 I don’t mean to make fun of the state of Kentucky. But the denizens of the hollers in and around coal country of that state can tell you that when coal was king, the coal companies could ravage the landscape and the streams could run orange with toxic metals and coal sludge and no one said anything because the coal companies controlled everything. They mined with impunity.

Old Coal is not a whole lot different from how industrial dairy farms operate today in Wisconsin, especially in Kewaunee County, a manure-soaked and politically compromised place where local citizens have battled mightily against the heavy-handed, willfully intransigent people running big dairy farms in that county.

How bad is it in Kewaunee County? A group called the Socially Responsible Agricultural Project (SRAP) has recently published “The RAP Sheets: Industrial Dairies in Kewaunee County.” The full report (it’s big, be ready for a slow download) is available from our good friends at Midwest Environmental Advocates.

SRAP pored through the records at the Dept. of Natural Resources for several dairies in that county. In mind-numbing detail, SRAP’s Rap Sheet captures exchanges between the agency and these farm operations. They document hundreds of episodes of manure illegally spread or simply dumped; of manure put on fields where it wasn’t supposed to go; of flows of seeping feed piles oozing their way toward local waterways (and eventually to Lake Michigan); of calls not returned and of suggestions or recommendations made by DNR staff politely ignored or blown off; and of absurdly small fines issued for egregious behavior.

Speaking of the DNR: Last week, the agency announced it was recommending new manure application methods for areas of the state susceptible to groundwater contamination. The DNR says it is developing voluntary recommendations. In other words, if you have 8,000 cows and you have the potential to contaminate your neighbor’s well, you can just volunteer to change a few things and that should help. No one will make you do anything you don’t want to do.

This all would be laughable if it weren’t so pathetically inadequate, not to mention 10 years late. These farmers are sophisticated operators. There’s nothing DNR can tell them about how to distribute manure. There is sufficient evidence from the Rap Sheet they don’t follow the rules now. Should we expect them to volunteer to follow something more stringent?

Quoted in the Milwaukee Journal Sentinel story about this bold step by DNR was prominent Kewaunee County dairyman John Pagel, who’s also a member of the Kewaunee County Board, where he sits on the land conservation committee. (Hmm, anyone see a fox/henhouse deal?) Pagel envisions “little resistance” to the recommendations from his brethren. There seems no doubt these guys won’t resist voluntary recommendations. They’ve been resisting the law and getting away with it for decades.

Speaking of John Pagel: he is featured prominently in the Rap Sheet (starting on Page 69 if you want to see the grim details).

Two other notable things in the Rap Sheet: One is the DNR observing in 2009 that Pagel’s operation was “not considered in substantial compliance with its current [water pollution prevention] permit.” Five years prior to that, and in the midst of lots of other dubious activities documented by the DNR at Pagel’s farm, agency secretary Scott Hassett wrote to Pagel to “commend” him for becoming a UW Extension Discovery Farm, writing that he was a “credit to environmentally responsible farming…and a model spokesperson for agriculture.”