The Dams That Were Not 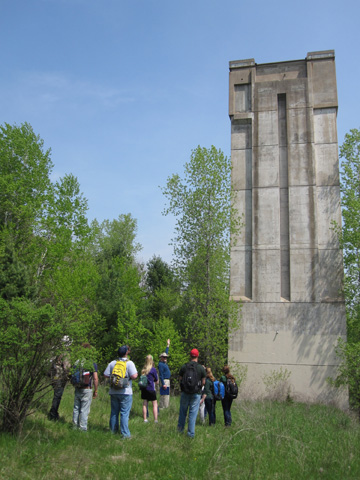 All that remains of a proposed dam on the Kickapoo River is this concrete observation tower and a quarter-mile long berm.  (Photo courtesy Friends of the Kickapoo Reserve)

Despite a growing portfolio of successful stories about restored rivers from removing dams, dam removal remains controversial. Though we have been out of the business of the dam removal process for many years, the River Alliance gets calls now and then to offer our expertise and advice to people committed to improving their river by removing decrepit and uneconomical dams.

We’ve been involved in three communities recently – the town of Dayton, in Waupaca County, the city of River Falls, and the village of Amherst – which are facing decisions about dams they are responsible for. In Amherst, village residents recently supported a referendum to keep that dam.

One consistently contentious issue, currently in Amherst and just about everywhere: what will the pond behind the dam look like once the thing that created it (the dam) is gone? Engineers and landscape architects can sometimes render convincing sketches to skeptical audiences of what a restored river will look like once a dam is gone.

Another way to look at what a river ought to be is like this: imagine a river that is free-flowing now that, for luck or fate or great foresight or public resistance, would have been dammed. It’s a compelling way to consider a dam’s effect on a river, and our own relationship to the river.

The Judges Got It

We recently tripped across a 60-year old legal case that spared a river from being dammed. The 7th U.S. Court of Appeals denied a power company’s request to build a hydro dam on the Namekagon River, a highly popular destination river for tubers, anglers and paddlers and part of the national Wild and Scenic Rivers system. In these days where making a case for the esthetic or “wild” value of natural resources struggles against economic imperatives, the court’s language from 1954 is refreshing to read.

The river was worth preserving in its natural state, wrote the court, because fishing there is “highly esteemed.” The court saw that people from urban centers would have a “thrill indeed” from witnessing a wild river and the wildlife thereof. In upholding the Federal Power Commission’s decision to deny the dam, the court said, unambiguously, that the “unique recreational features of the river were of greater public benefit that the use of the river for water-power development.”

The Dams that Weren’t

Besides the Namekagon, there are two other Wisconsin rivers treasured by recreationists today that were also spared dams. The best known one is on the Kickapoo, near La Farge. That dam was proposed by the federal government in the 1970s to control flooding, but land speculators got all excited about selling lots around the new “lake” the dam would create. The dam was never built.

The result is one of Wisconsin’s loveliest and most treasured river valleys, now managed by the Kickapoo Valley Preserve.

Another dam proposal is hardly known but is very significant in Wisconsin river history. Back in the late 1950s, land speculators proposed a dam on the Wolf River, again to sell lakeshore lots. Hunting and fishing groups pushed back, convincing our old friend Dave Martin, a state representative at the time, to stop the dam’s construction. Dave convinced the Legislature to essentially buy out Langlade County’s investment in the dam. The threat to the Wolf prompted conservation groups and Dave Martin to protect more threatened rivers. Dave sponsored the legislation that created Wisconsin’s Wild Rivers law, from which the federal Wild and Scenic Rivers law directly descends, via Gaylord Nelson. Nelson was Wisconsin’s governor and signed the Wild Rivers initiative into law in 1965.

On the banks on the Pine River, Dave Martin (center, in the read coat) tells of his role in developing the state’s Wild Rivers at the 40th anniversary, in 2006, of the Wisconsin Wild Rivers program. (Picture Below) 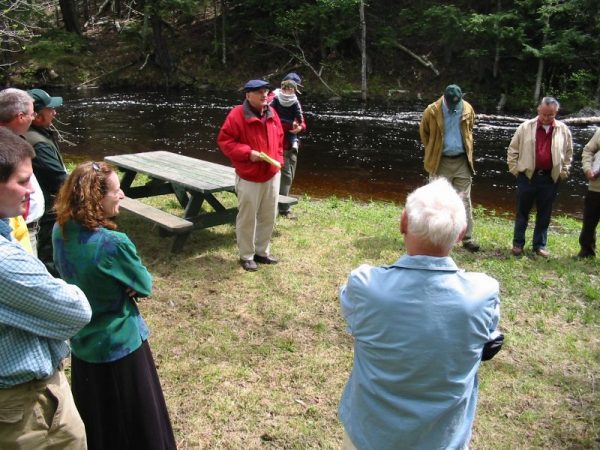