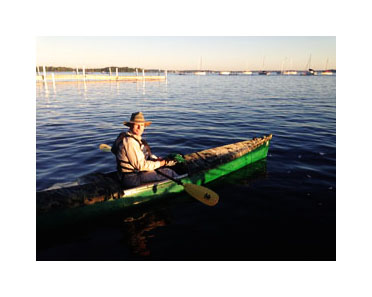 “The Irish Voygeur” title that canoeing adventurer John Sullivan gives himself conjures a picture of a Guiness-quaffing “all hail good fellow” type hanging out in pubs in Galway.

That is not the John Sullivan I know. This one is an intrepid and irrepressible canoe voyageur for whom no river is too long and no upstream current is too tough to take on. Jumping from one river drainage basin to the next, which requires loading up his canoe onto a cart and towing it like a human mule, is, for John Sullivan, a nice break from using his arms.

This fall’s excursion: up the Wisconsin River, down the Fox River and into Lake Winnebago. Then up the Fond du Lac River, walk to the Rock River basin, paddle down the Rock to the Yahara, then upstream at that point to enter the Madison lakes.

The wind on the eastern Madison lakes flummoxed the usually unflappable Sullivan. He took up my offer for a warm bed and a square meal on Sunday night, fortifying himself for what would be his most epic hike: paddling across the often windy Lake Mendota, then towing his boat on the cart to Mazomanie, where he could reenter the Wisconsin River system via Black Earth Creek.

I was honored to accompany him to the shores of Lake Mendota where he launched in a warm morning sun amidst many crew boats shuttling back and forth.

He called late Monday afternoon to proclaim the “life of Riley” he was living at the Belair Motel in Mazo. John seems to be getting soft — a bed two nights a row.

He carries on to Saturday, ending the voyage by paddling upstream on the Mississippi to La Crosse.