There’s a Model on the Groundwater Runway 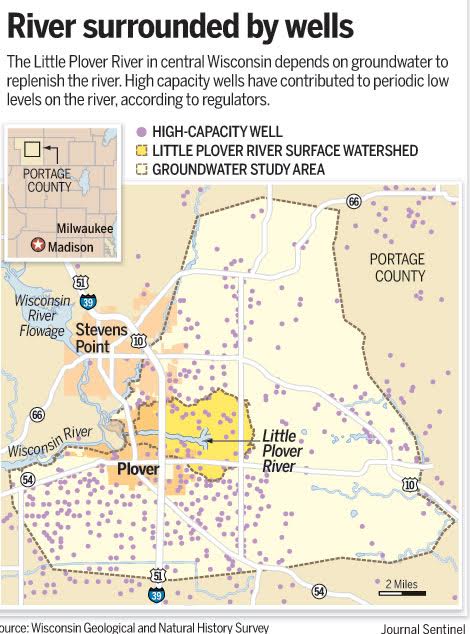 One of the many myths peddled by agricultural interests in their effort to stifle any meaningful regulation of groundwater pumping for irrigation is that “the science isn’t settled” about whether all that pumping takes water from lakes and streams. When you hear this come out of a legislator’s mouth, you know a lobbyist for Big Ag was just in her office.

When water advocates hear the refrain, “We need more science,” they groan, knowing it is often a tactic to delay policy action on groundwater pumping.  Nonetheless, we have supported the development of a groundwater model for the Little Plover River, commissioned by the Wisconsin DNR and developed by the Wisconsin Geological and Natural History Survey.  (“Model” in this instance means a predictive analytical tool.)

Nearly three years in the making, the model was supposed to show to what extent the pumping of groundwater – for farming, municipal and industrial use – in the very modestly sized Little Plover River basin took water out of the river itself.  For years – even in rainy years – the river has dried up, giving it the dubious distinction of a nationally recognized Endangered River (by American Rivers) in 2013.

A draft of the model has been released, and River Alliance’s consulting hydrologist Ken Wade has found the model wanting.  Wade said the model fails at the very thing we all had hoped such a model would clarify:  to clearly evaluate and report the long-term effects of pumping on the Little Plover River.

This is deeply disappointing. We acquiesced to the idea of a Little Plover River model by DNR because they refused to enforce a “public rights flow order” for the river, a regulatory tool that would allow them to stop groundwater pumping to prevent the river from drying up.

It’s not too late to change the model though, and we expect the model’s developers will take Wade’s and other hydrologists’ comments seriously.