Water Users, Start Your Pumps: The Politics of a Legal Opinion 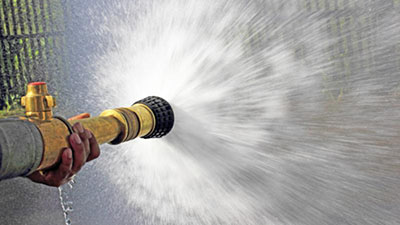 This week’s opinion from Attorney General Brad Schimel that (among other things) the Wisconsin DNR doesn’t have express authority under state law to regulate the overall impact (“cumulative”) of a big (high-capacity) water well hit us all like a high-pressure hose in the face.

Schimel hangs his argument on a law passed in Act 21, in which the Legislature stated that “no agency may implement or enforce any standard. . . .unless that standard is explicitly required or explicitly permitted by statute or a rule. . . “

The Attorney General doesn’t necessarily have an interest in groundwater policy. He was asked by Assembly Speaker Robin Vos to analyze what DNR’s authority is when it comes to reviewing requests for permits for huge water wells pumping at least 100,000 gallons per day.

And why did Vos ask for this? Because agricultural interests who use huge amounts of water pumped from underground for their operations – namely, potato and vegetable growers and industrial dairies – hated the idea that DNR scientists could determine the impact of a well not just in isolation, but the cumulative impact of a whole bunch of wells in one area and how all that pumping would affect nearby lakes and streams. You could call cumulative impacts the “last straw” effect, metaphorically referring to drinking straws: is it the third or fourth straw in the milkshake that will really start to draw it down fast?

Big Ag was losing in the Capitol this winter, thanks to a well-orchestrated and vociferous campaign by citizens (many flying under the flag of the Central Sands Water Action Coalition, which we helped organize) to stop two bills bad for groundwater.  After working the legislative sausage-maker for months, Big Ag, led by the Dairy Business Association (and abetted by its handmaiden Wisconsin Manufacturers and Commerce), likely appealed to the Speaker to carry this water for them.

They had to be confident they could get the decision they needed from the Attorney General.  A few months previous, an assistant attorney general opined, in a matter of 24 hours after the opinion was requested by DNR, that the agency didn’t have the authority to require monitoring wells on a big dairy farm in Kewaunee County whose manure was known to leak to underground drinking water supplies.  The day the DNR got that opinion, they threw their hands up and said, “Gee, we have no authority.”  Sadly, they will likely do the same with this opinion, after several years of good effort by DNR scientists to quantify just how a big well – in liquid concert with neighboring wells – would drain water from a nearby stream or lake.

The implications are many for this draconian opinion: