This is the introductory article from our winter 2018 WaterWays newsletter. Download a PDF of the full Newsletter.

Heroes of the Public Trust
By Raj Shukla 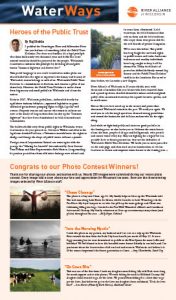 I paddled the Namekagon River and Milwaukee River last year because of something called the Public Trust
Doctrine. For those not familiar, it’s a legal principle that dates back nearly two thousand years and holds that some natural resources should be preserved for the people. Wisconsin’s constitution embraces this principle by declaring all navigable waters “common highways and forever free.” This poetic language in our state’s constitution makes plain our shared belief that the right to experience the beauty and bounty of
Wisconsin’s waters belongs to each of us. Wisconsin’s Public Trust Doctrine is a commitment to freedom, and remains a pillar of our democracy. However, the Public Trust Doctrine is under threat from big money and small politics in Wisconsin and across the nation.

Early in 2017, Wisconsin politicians—influenced heavily by agriculture industry lobbyists—approved legislation to grant unlimited groundwater pumping rights to high-capacity well owners. Property owners and anyone who wants to recreate are now at the mercy of corporations that can dry up the “common highways” that have been foundational to local economies and communities.

The backward slide away from public rights to Wisconsin waters continued as the year pressed on. Governor Walker and allies in the legislature handed Foxconn, a Taiwanese manufacturer, the rights to dredge and change the shape of public waters without a permit.

Foreign-owned corporations claimed our water again with the passage the “Mining for America” law authored by State Senator Tom Tiffany and State Representative Rob Hutton. Long-standing, bi-partisan protections from acid mine drainage were relaxed and, in some cases, eliminated. Local waterways, the local businesses that rely on them and the local residents who enjoy them were put at risk for the sole benefit of private companies.

We’ve seen this before. The public has long fought for universal rights to public waters and lands. And some businesses and wealthy individuals have long sought to keep it all for themselves. Today the balance of power has shifted decisively toward big money and the Public Trust Doctrine itself is in the crosshairs. But as we’ve done before, we can write a new chapter.

River Alliance of Wisconsin is 25 years old this year, with thousands of members like you: heroes who have removed dams and opened up rivers, derailed destructive mines and shortsighted policy alike, monitored waterways for aquatic invasive species, and so much more.

Heroes like you have stood up to the money and power that threatened Wisconsin’s waters in the past. We need you again. We need you to ask the tough questions, demand strong protections and reward the businesses and decision makers who do the right thing.

And while we fight bad policy and insist on good practices in the coming year, we also invite you to celebrate the water heroes across the state, people of all ages and backgrounds, who protect and restore water every day. They are fighting for a legacy we can proudly leave to future generations; they are the defenders of Wisconsin’s Public Trust Doctrine. We invite you to meet just a few on the next page, and then send us your nominations so we can continue to elevate and empower water heroes in the coming year.