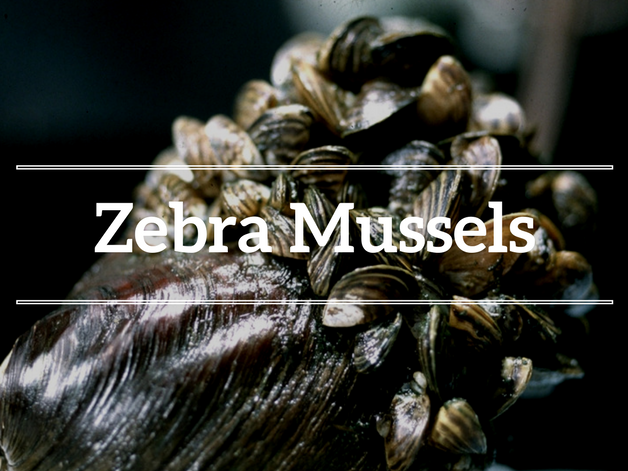 Zebra mussels are small shellfish that can grow to 2 inches in length. Color patterns can vary to the point of having only dark or light colored shells and no stripes. They are typically found attached to objects, surfaces, or each other by threads underneath the shells. Although similar in appearance to the quagga mussel, the two can be distinguished. When placed on a flat surface, zebramussels are stable on their flattened underside while quagga mussels, lacking a flat underside, will fall over.

Zebra mussels were likely introduced to North America in the ballast water of ships traveling to the Great Lakes. Secondary spread has been the result of it being transported by recreational boaters, both adult mussels and their larvae (veligers).
Impacts to Rivers

Zebra mussels pose a serious threat to the diverse native mussel populations of our rivers, including the Lower Wisconsin River, can pollute the popular beaches and sandbars of the river, and can easily be spread to surrounding waterbodies via boaters. Once established, zebra mussels could cause an increase in utility rates throughout the region through their potential to clog intake pipes, turbines, and other equipment.